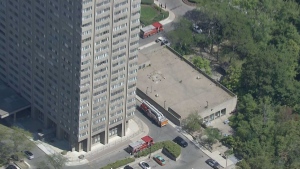 Crews are on the scene of a fire that broke out at a highrise building in Thorncliffe Park. (Chopper 24)

Several residents of a highrise in Thorncliffe Park have been displaced following a three-alarm fire and a subsequent power outage on Thursday.

Toronto Fire received a call about a fire at a 44-storey building at 11:18 a.m. They said the fire started in an electrical utility room on the 42nd floor and smoke then spread to several floors.

Speaking to reporters Thursday evening, Fire Chief Matthew Pegg said the fire was quickly contained on the floor of origin and was quickly knocked down.

He said one person was taken to hospital for smoke inhalation, and they have since been released.

According to Pegg, an electrical failure caused the fire and also led to a partial power loss in the building. Eleven upper floors on the eastern portion of the highrise are without electricity.

It is not immediately known how many residents were displaced. Pegg said all tenants on the 42nd floor were evacuated as it suffered significant fire and smoke damage, making it unsafe.

He added that some tenants from other floors were also removed from their units either due to the fire or the outage.

"(I'm) really also very pleased to report that the owner of the building very quickly has been able to source them alternate accommodations. So everyone is being looked after; they're being well cared for," Pegg said.

There is no exact timeline on when the power could return to the affected floors. Pegg said fire crews, electricians and the building's owner are working on a plan to restore electricity as soon as possible.

"We are awaiting the results of the work that the Electrical Safety Authority and the electrical engineers and electricians," Pegg said. "I expect, based on previous experience, I think that that will probably take a few days to iron out. We may see a quicker than that."

"It really depends on what they encounter, and what the circumstances as they get into the detailed examination and detailed inspection of the remaining electrical system. And of course, what they need to do to be able to repower the building safely," he added.

Pegg said fire crews will remain at the scene "for the foreseeable future" as they continue to investigate the incident.

Meanwhile, Toronto Mayor John Tory visited the building Thursday evening to check on the residents. He thanked the first responders for their work in preventing the fire from spreading and the owner of the highrise for looking after the displaced residents.

Crews are on the scene of a fire that broke out at a highrise building in Thorncliffe Park. (Chopper 24)