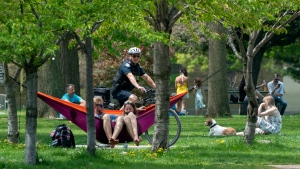 A bicycle police officer patrols Trinity Bellwoods Park in Toronto on Sunday, May 24, 2020. Warm weather and a reduction in COVID-19 restrictions has many looking to the outdoors for relief. THE CANADIAN PRESS/Frank Gunn

Toronto Police Chief Mark Saunders says several tickets were issued at Trinity Bellwoods Park on Saturday after people were spotted defecating and urinating in the driveways and backyards of homes nearby.

Thousands of people flocked to the park on Saturday, ignoring physical distancing rules and disobeying the province’s emergency order banning gatherings of more than five people.

While officers did not hand out fines to the large swath of people neglecting to comply with physical distancing rules, Saunders said a number of tickets were issued for disorderly conduct.

"A lot of complaints were coming in from the residents, people urinating, people defecating on their properties," he said. "When you've got an elderly woman opening the door and seeing someone defecating, it is quite bothersome."

He said enforcement has been ramped up at the park today to ensure the situation is not repeated.

"We want you to enjoy the park but there are boundaries," he said. "You can't be cavalier in breaking the law."

He said he hopes people begin to understand the impact of their actions.

"When you don't see the threat, you are less likely to understand the impact you are having. If it were scorpions, they'd be nobody here at the park," he said. "I'm just hoping that people understand this is about saving lives."

Brad Ross, a spokesperson with the City of Toronto, said officers will try to focus more on education than doling out tickets.

"Having police and municipal bylaw enforcement in the park helps make people understand why we are doing what we are doing," he said Sunday. "We can't have crowds like we saw yesterday."

Ross said while there is "no excuse" for people urinating in driveways and backyards, the city is working to reopen washrooms in public parks.

"We are working with Toronto Public Health on a protocol to allow us to open up the public washrooms in parks because there are some cleaning regimens that we have to put in place to ensure that people can stay safe and healthy when using public washrooms," Ross said.

"So that is a process that is underway now and we hope to be able to make an announcement on that fairly soon."

Four tickets were issued to visitors of Trinity Bellwoods who were allegedly disobeying the physical distancing bylaw and provincial orders, the city said.

Crowd was 'out of control,' mayor says

Mayor John Tory, who referred to the behaviour as "incredibly disappointing," said he visited the park on Saturday night to get a glimpse of the situation.

"I saw a crowd scene that was completely out of control relative to what we have been saying people should do... (People) were sitting in big groups really close together," he said.

He noted that people were violating not only the province's emergency order but also the municipal bylaw that requires people from different households to stay two metres apart in public parks.

The orders have been put in place to slow the spread of the virus, which has claimed the lives of more than 2,000 people in Ontario so far.

"I just was dumbfounded by this kind of lack of personal responsibility," Tory said Sunday.

The mayor said people at other parks around the city appeared to follow physical distancing guidelines but for some reason, people at Trinity Bellwoods Park decided to "thumb their noses" at the laws.

The mayor said the city considered closing the park today but officials decided they didn't want to punish people who are respecting the rules.

"There was lots of room in the park to spread out if they had chosen to do so," Tory said, adding that most people decided to congregate in one specific section of the park.

"They don't realize that by doing what they did yesterday, they are running a real risk that we are going to prolong this whole thing or have to close the city down again."

"The images I saw yesterday from Trinity Bellwoods Park in Toronto, you know I thought it was a rock concert at the beginning when I went out there. I was absolutely shocked," he said.

"I get it, it's a beautiful day out... that is the reason we opened the parks so that people could get out there and enjoy the weather but the images I saw, we just can't have that right now. It is just too many people too close."

"I understand it has been difficult being at home, isolated... But we are in the middle of a global pandemic and we are not out of the woods in the city," she told CP24 on Sunday.

"We need to continue to maintain that physical distancing for now so we can get back to those regular aspects of life."

She said young people need to understand that they too can become infected with the virus and can spread it to others who are more vulnerable.

"I think some people feel that they are not at risk or that this doesn't impact them but this isn't true," she said. "We've made so much progress. Let's not lose that progress."