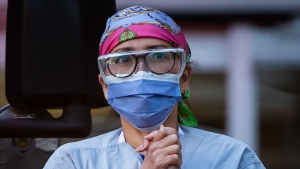 A healthcare worker at St. Paul's Hospital acknowledges applause and cheers from people outside the hospital, as a convoy of first responders with lights and sirens activated parade past to show support for the hospital staff, in Vancouver, on Sunday, April 5, 2020. THE CANADIAN PRESS/Darryl Dyck

Premier Doug Ford says the province is left with only a one-week supply of personal protective equipment (PPE) due to delays in global shipments and “recent restrictions” at the U.S. border.

In a written statement released Monday, Ford said the province’s PPE inventory has been “severely strained” and Ontario cannot rely on global supply chains any longer.

“That’s why we have taken steps to ramp up Ontario-based manufacturing of critical PPE. Many of these Ontario-based supplies are weeks away from being in the hands of frontline health care workers,” Ford’s statement read.

“In the meantime, we are desperately counting on the fulfillment of shipments that Ontario has placed through the federal government’s bulk purchasing program.”

The directive has prevented the U.S.-based company from filling Ontario’s order of five million units.

On Monday evening 3M released a statement saying that the company had reached a plan with the U.S. administration that would allow them to import 166.5 million respirators from China over the next three months. The company said the deal would allow them to continue supplying Canada and Latin America, but it was not immediately clear how much of Canada’s need would be met.

“I am very pleased that a resolution has been reached between 3M and the U.S. administration,” Ford wrote. “I want to thank 3M and officials on both sides of the border for their support to ensure Canada’s continued access to vital PPE. We are stronger together.”

Last week, the premier slammed U.S. President Donald Trump, saying he was “disappointed” in the decision.

In his statement Monday, Ford said he, along with the federal government, are working with top-ranking U.S. officials to try to “make the case” for Canada to be exempt from the president’s order.

“These conversations have been progressing well and we are optimistic that the U.S. government will grant Canada an exemption,” Ford’s statement read.

Speaking to reporters at a news conference on Monday afternoon, Ford said two shipments of close to four million masks were held up at the U.S. border over the weekend. He said he has been told that 500,000 of those masks will be released today.

"We know that the U.S. isn’t allowing supplies across the border. And as the global demand escalates, getting supplies from other countries is increasingly difficult. We are doing everything in our power. We are exhausting every avenue available to us, turning over every single stone," he said.

"But the hard truth is, our supplies in Ontario are getting very low and the more new cases we get, the more demand is placed on our resources."

Ford said when the 500,000 masks arrive in Ontario, it will buy the province another week when it comes to inventory.

He said the most difficult items to procure right now are Level 2 surgical masks, N95 masks, and surgical gowns.

"This is all that’s on my mind," Ford said. "I don’t sleep at night thinking about these PPEs."

Deputy Prime Minister Chrystia Freeland said Canada has made it clear in conversations with U.S. officials that the flow of medical goods and services between Canada and the U.S. is a “two-way street.”

Speaking to reporters at a news conference on Monday afternoon, Freeland said both countries “would lose out” if hurdles are put in place that disrupt the supply chain.

“We made that point in repeated conversations over the weekend and today,” Freeland said. “We feel we are being heard and we look forward to a definitive resolution of this situation.”

Freeland said since the pandemic was declared, it has been very difficult to obtain protective equipment as countries "fiercely" compete for critical supplies.

"It is really a wild west when it comes to buying medical supplies right now," she added. "It is absolutely very, very tough right now."

A healthcare worker at St. Paul's Hospital acknowledges applause and cheers from people outside the hospital, as a convoy of first responders with lights and sirens activated parade past to show support for the hospital staff, in Vancouver, on Sunday, April 5, 2020. THE CANADIAN PRESS/Darryl Dyck