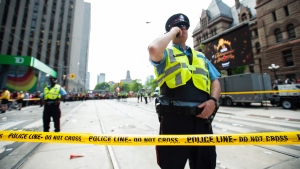 Toronto Police secure the scene after a shots were fired during the 2019 Toronto Raptors Championship parade in Toronto, on Monday, June 17, 2019. THE CANADIAN PRESS/Andrew Lahodynskyj

Four people were injured after gunfire broke out at Nathan Phillips Square during a massive celebration for the Raptors Monday afternoon.

There were multiple reports of gunshots and stampeding at around 3:45 p.m. as hundreds of thousands of people were jammed into the square for a rally celebrating the team’s NBA Championship win.

Toronto police initially confirmed that two victims were located with serious, but non-life-threatening injuries in the area of Bay and Queen streets. Toronto Paramedic Services said they transported one adult woman to hospital.

In an update at around 6 p.m., Toronto Police Chief Mark Saunders said a total of four people in fact sustained gunshot wounds in the incident. All of the injuries are considered non-life-threatening, he said.

Three people were arrested a short time after the gunfire and two firearms were recovered, police said.

“The apprehensions were done incredibly quickly after the incident itself,” Saunders said.

An image sent to CP24 by a viewer showed officers tackling one of the suspects.

The gunfire set off panic at the massive celebration. Images shared from the scene showed throngs of people stampeding to get away from the area.

One bystander told CP24 that he heard a “rumbling” on the ground just before a stampede of people.

“We were standing watching and we heard this rumbling on the ground and we started to look around to see what could it be,” he said. “Then I see everyone behind my mom just getting trampled, everyone’s getting pushed. So I grab my mom and just hold on.

“It didn’t stop, everyone kept falling. My mom was screaming ‘don’t fall, don’t fall. If you don’t fall, we’ll be okay. We were trying to recollect and see what happened, and then it happened again. That’s when ‘we realized we have to leave the arena this second.’”

Another bystander told CP24 he took a child under his arms to prevent him from getting trampled on.

“People were running from every area, so we didn’t know what happened,” he said. “A mother and her child were there, just nine or 10 years old. His mom kind of freaked out and said ‘I can’t lose him’ and he asked ‘can I go under you?’ and I said ‘of course’ and just kind of put them behind me. It ended up being calm in a few moments and it was okay.”

Shoes, backpacks and cell phones could be seen scattered on the ground following the chaos.

The shooting happened as the Raptors sat onstage with Mayor John Tory, Premier Doug Ford and Prime Minister Justin Trudeau. The ceremony onstage continued despite the incident and people were being urged to remain in place.

Officials at the rally urged the massive crowd to remain calm despite “an emergency situation nearby.”

When the rally eventually finished, the crowd dispersed normally.

Speaking with reporters Monday evening, Saunders said there was a “tremendous amount of work” that went into keeping people safe at the festivities.

“I can’t describe the amount of resources that you don’t see that are involved in the type of work that is involved to get to where we are today,” he said.

In a statement, Mayor John Tory described the shooting as “most unfortunate” and thanked police for their work.

“It is disappointing and I'm sure a source of anger for more than just me that anyone would carry a gun and discharge it at what was otherwise a joyous celebration,” Tory said in his statement. “I hope those found responsible will be held to account to the full extent that the law permits.”

He thanked “the millions of other people who happily and peacefully celebrated.”

Saunders urged anyone with video or other information to come forward to investigators.

“This did not happen in a vacuum, this happened in broad open spaces right now where we had over a million people here. We want the witnesses – 99.9 per cent of those who were here were here to enjoy the festivities of the Raptors winning the championship – we want them to step up and to help us by giving us as much evidence as you have.”

In addition to the shooting, four people were injured in two separate stabbing incidents around the Eaton Centre during the rally. Police have not made a connection between any of the incidents.