Shooting that killed innocent bystander appears to have been motivated by rap video: police 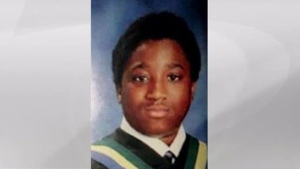 Police say that at least seven individuals armed with semi-automatic handguns “indiscriminately” opened fire on a group filming a rap video in a Malton parkette on Saturday evening, killing an innocent bystander in the process.

The shooting occurred in a parkette behind an apartment complex near Morning Star and Goreway Drives at around 6:30 p.m.

A 17-year-old boy was pronounced dead at the scene while five others sustained serious injuries. Those victims include a 13-year-old girl, a 16-year-old boy, two 17-year-old boys and a woman in her 50s.

Friends, area residents and a local community activist have identified the victim as Jonathan Davis.

At a press conference on Sunday afternoon, Peel Police Chief Chris McCord said that investigators believe the suspects were motivated, at least in part, by another rap video that had been shot in the same parkette by the same group and released earlier this week.

That video, he said, contained information “challenging other people within the community.”

McCord said that police have not yet been able to ascertain how many of the victims were involved in the video shoot, though he said that at least some of those shot were bystanders who were simply in the wrong place at the wrong time.

“We believe their (the suspects) motive for coming here was to target those individuals shooting the rap video. There just happened to be a lot of people outside – it was a nice night last night – and they became victims caught up in this attack,” he said.

McCord said that officers have located in excess of 100 shell casings and expect to find even more as they continue to comb the scene for evidence.

He said that it appears as though the suspects “covertly approached the side of the apartment building and then made their way along the side of the building” before getting into position and “indiscriminately opening fire” on those shooting the video in the park behind the building.

The suspects, he said, were all wearing dark-coloured clothing and many of them had on balaclavas to conceal their identity.

“This was very brazen. It was a beautiful evening. There was an ice cream truck here and there were families lined up outside the ice cream truck and then they (the suspects) came in and just indiscriminately opened fire with no regard for any of the innocent people gathered here,” he said.

McCord said that one of the five surviving individuals struck by gunfire has since been released from hospital while the other four are listed in stable condition.

Speaking with reporters alongside McCord, Mississauga Mayor Bonnie Crombie described the shooting as a “senseless, tragic” act of violence.

“I am a mother and I was just crushed to hear that there are individuals marring a beautiful evening by executing senseless violent crimes with semi-automatic weapons,” she said. “My heart goes out to the family of this innocent victim, now deceased, who by all accounts was outstanding young man who lived here in the complex. It is just a senseless event.”

Crombie said that residents of the complex are understandably shaken in the wake of the shooting but she said that it is a “targeted and isolated incident.”

She said that there will be an increased police presence in the area for an extended time period.

“The community should feel safe,” she said.

Peel District School Board spokesperson Carla Pereira said they will be providing support to any student or staff who might need it tomorrow.

Davis was a Grade 12 student at Lincoln Alexander Secondary School.

Pereira said school staff have extended their condolences to the family.

"Anyone who is wishing to speak to someone who may have known Jonathan or not but is struggling to deal with their grief will be asked to seek out the support of a counselor or another member of the Critical Incident Response team."