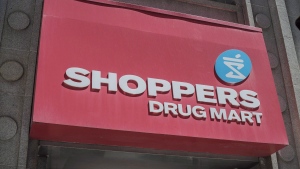 The logo for Shoppers Drug Mart is shown in downtown Toronto, on Tuesday, May 24, 2016. THE CANADIAN PRESS/Eduardo Lima

TORONTO - Shoppers Drug Mart is opening medical clinics in Toronto where family physicians will be available to take on a roster of patients and accept appointments for walk-in services.

The pharmacy chain says its first pilot clinic opened in the city's midtown with two more planned for the Greater Toronto Area over the next year, including one in the downtown core.

The clinic is open from 8:30 a.m. to 7 p.m. on Monday through Thursday, but closes at 2:30 p.m. on Fridays. It is closed on the weekend right now, but the clinic is planning to expand its hours in the fall.

Shoppers, which is owned by Loblaw Companies Ltd., has been expanding beyond traditional retail and says it has created a team of physicians to implement the health clinic business.

Managing clinics is not an area of expertise or interest for most doctors, said Theresa Firestone, senior vice president of health and wellness at Shoppers Drug Mart.

“So that's something that we felt that we could help them with, by taking that administrative burden, and allowing them to spend all of their practising time dealing directly with patients,” she said in an interview.

“Particularly, we saw during COVID-19, a lot of physicians were not set up to do virtual care. So we were able to help our physicians in the clinic.”

The brick and mortar clinic in Toronto comes on the heels of a service launched last month in British Columbia, which offered in-store telehealth appointments. Patients using the B.C. service receive an examination by a doctor - by way of a video call on a website called Maple - but can also use in-store tools such as rapid strep tests.

“Our focus over the last few years has been really expanding our health and wellness offering to customers to make sure that not only do they have the core pharmacy offerings that we have, but a number of other health-care options available to them. A lot of that occurs through our stores. A lot of those health care offerings also occur through some of our other businesses,” said Firestone.

“A number of our patients that come to the store to get a prescription, they'll have challenges to get access to primary care ... during COVID-19 we saw more and more people having those challenges.”

“It varies how pharmacists in different provinces are able to assess patients and prescribe,” said Firestone.

While Alberta pharmacists are able to prescribe most products, she said there are other provinces it can't support in the same way.

If the foray into clinic management - as opposed to just clinics as tenants - is successful, the model could expand beyond Ontario, the company said.

“We are committed to getting this right for our patients and once the model is validated and refined we hope to reach more Canadians by expanding clinics to other parts of the country,” a spokeswoman said in a statement to The Canadian Press.