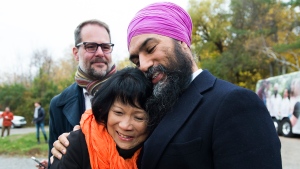 OTTAWA -- NDP Leader Jagmeet Singh invoked the legacy of his venerated predecessor Wednesday, hoping the memory of Jack Layton -- the principal architect of the NDP's best-ever showing in a federal election -- would separate him from a pack of rivals wooing voters in Quebec as the clock ticks down to voting day.

Every federal leader save Elizabeth May began Wednesday in Quebec, including three in and around the Montreal area, a rare campaign confluence where major party leaders were in the same area at the same time, and a clear sign of where strategists are focusing their efforts with less than a week to go.

An upswing in Bloc support in the province could scuttle both Liberal and Conservative hopes of winning enough seats to form a majority, and could mean deeper electoral problems for the New Democrats.

So Singh's pilgrimage to Hudson, Que., where Layton was raised, was seen as a bid to appeal to the hearts and minds of Quebec voters.

Singh said he wants to build on Layton's legacy in the province, acknowledge the work the late leader did -- some of it better than Singh's own, he admitted -- and capture some of that 2011 magic for the New Democratic Party, which polls suggest could be down to one or two seats in Quebec after election day.

"The support that we're receiving on the ground is going to translate to support at the polls and I'm confident that people will see that we will fight for them," Singh said, at a morning event standing alongside Layton's widow, Olivia Chow.

"We care about them, we share the values of Quebecers and we're going to make sure that they can count on us to fight for them in the next Parliament, no matter what the Parliament looks like."

Trudeau's agenda Wednesday included numerous stops with local candidates on a zigzag tour from Montreal to Sherbrooke, hoping his personal brand would shore up his party's standing in his home province.

During a morning event at Montreal's botanical gardens, backed by numerous Quebec Liberals, Trudeau urged Quebecers to support his party so they can have a voice in a progressive government, not a progressive opposition. He also tried to frame the choice for Quebec voters contemplating supporting the Bloc.

"The focus of the Bloc is to stand up for Quebec against the federal government," he said.

"Yet with our priorities, every step of the way, we've demonstrated that we as a team of Quebecers are always there to stand up for Quebec values and indeed Canadian values."

Scheer stopped by a Tim Hortons in one of Montreal's northern suburbs with one of his star candidates, former Olympic champion synchronized-swimmer Sylvie Frechette, after spending Tuesday barnstorming the province. After the appearance with Frechette, he moved on to southwestern Ontario, another vital battleground, sounding a note of confidence for his chances on election night.

"One of the most common phrases our candidates report hearing at the doors, is a voter who answers the door and says, 'I voted Liberal in 2015, I'm voting Conservative in 2019,' " Scheer said in Essex, Ont., after announcing a promise to legislate stiff penalties for MPs caught in violation of ethics rules.

May, the Green party leader, was to make an announcement on health care in Victoria, near her home riding of Saanich-Gulf Islands in B.C., while People's Party Leader Maxime Bernier is spending the day focused on keeping his own Quebec seat in Beauce.

This report by The Canadian Press was first published on Oct. 16, 2019.