Singh says he would 'encourage' provinces on health-care services 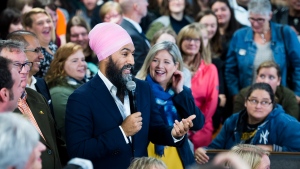 WELLAND, Ont. -- NDP Leader Jagmeet Singh says he would use federal health-care transfers to provinces to influence their decisions and encourage better delivery of services.

Singh told the Winnipeg Free Press that he would push for an emergency room in that city to be re-opened, and he kicked off his campaign by promising to get a new hospital built in Brampton, Ont.

But health care is a provincial responsibility, and Singh acknowledged today that Ottawa doesn't have the power to force the provinces to comply.

He says the federal government does "have the power to be persuasive," and could urge that increased investments come with better health-care services.

Known as Bill 21, the law bans civil servants in positions of authority from wearing religious symbols and is popular in Quebec.