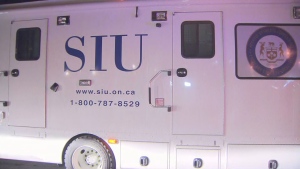 Ontario's police watchdog is investigating after a 19-year-old man was fatally shot this morning during an exchange of gunfire with officers in Sault Ste. Marie.

The Special Investigations Unit says police were called to a home around 3:40 a.m. on reports of a domestic incident.

The SIU says that shortly after 4 a.m., an officer was shot and police fired at the man.

The agency says the man was shot and died at the scene.

It says an officer was also taken to hospital to be treated for serious injuries.