SIU investigating after man injured in police shooting in Vaughan 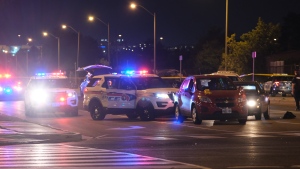 York Regional police are investigating a shooting in the area of Steeles and Islington on Tuesday night. (Peter Muscat)

The province's police watchdog is investigating after a police allegedly shot a man on Tuesday night in Vaughan.

The vehicle then collided with a civilian vehicle, the SIU said.

Preliminary information, the agency said, suggests a confrontation happened between officers and the driver of the alleged stolen vehicle.

The SIU said a police officer discharge his firearm, injuring the driver.

He has been rushed to hospital, where he remains in serious condition.

York Regional police said a woman, who was also in the vehicle, was taken to hospital as a precaution.

An officer was also transported to hospital as a precaution, police said. He has since been releasesd.

Also, the SIU said one subject officer and five witness officers have been designated.