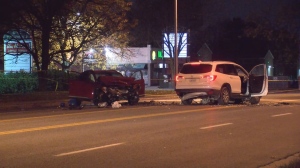 The Special Investigations Unit is investigating after a collision between a vehicle under investigation by Toronto police and another vehicle in Markham Saturday night.

The province’s police watchdog is investigating after a 55-year-old civilian was seriously injured in a crash in Markham Saturday afternoon.

On Saturday afternoon, officers from Toronto Police Services (TPS) found a vehicle of interest in the area of Steeles Avenue W. and Bathurst Street, according to a press release issued by the Special Investigations Unit (SIU) on Sunday.

Officers followed the vehicle throughout Toronto and Markham but the driver managed to flee police through the parking lot of the Markham Stouffville Hospital, the SIU says.

At around 5:05 p.m., the vehicle, which had been travelling westbound on Highway 7, crashed with another vehicle travelling eastbound.

The collision occurred in the area of Wooten Way.

The SIU says the 55-year-old male driver of the eastbound vehicle was taken to hospital with serious injuries.

It is unknown if the driver of the other vehicle, who was fleeing the police, is facing any charges.

The SIU is asking anyone with video evidence or any information about the investigation to contact the lead investigator at 1-800-787-8529.

The Special Investigations Unit is investigating after a collision between a vehicle under investigation by Toronto police and another vehicle in Markham Saturday night.