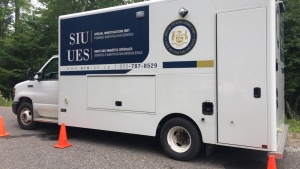 Ontario’s police watchdog has been called in after York police officers allegedly shot a 26-year-old man with a less-lethal gun and tasered him during a call for an intruder.

At about 6 a.m. Wednesday, York Regional Police Services was dispatched to a home in Aurora on Cashel Court, near Bathurst Street and Bloomington Road, the Special Investigations Unit (SIU) said in an Aug. 10 news release.

Officers were reportedly “given information” that a person of interest was at the residence armed with a knife and once at the scene, they contained the area.

Two hours later, at around 8 a.m., one of the officers discharged an Anti-Riot Weapon Enfield (ARWEN) at a 26-year-old man, the agency said.

Two other officers at the scene also reportedly deployed their conducted energy weapons (Tasers) at the same man, who was subsequently apprehended and transported to hospital.

The SIU says it “does not appear” that the man was seriously injured due to the ARWEN deployment.

The SIU’s mandate has been invoked as an ARWEN is classified as a firearm. The Special Investigations Unit Act defines a firearm as a barreled weapon from which any shot, bullet, or other projectile can be discharged and is capable of causing serious bodily injury or death to a person.

Anyone with information about this investigation, including video or photos, is asked to contact the SIU’s lead investigator at 1-800-787-8529 or online.

The SIU is an arm’s length agency that investigates reports involving police, as well as special constables with the Niagara Parks Commission and peace officers with the Legislative Protective Service, where there has been death, serious injury, allegations of sexual assault, and/or where a firearm has been discharged at a person.