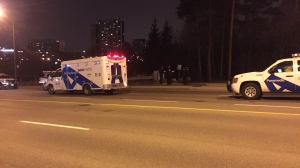 A man is in hospital after a shooting in North York overnight. (Mike Nguyen/ CP24)

The province’s police watchdog is investigating after a 21-year-old man was fatally shot during an interaction with police in North York overnight.

It happened in the area of Leslie Street and Sheppard Avenue.

In a news release issued Monday morning, the Special Investigations Unit said officers were called to the Leslie Subway Station at around 11 p.m. for reports of two men fighting.

One of the men, according to the SIU, fled on foot into a nearby park.

Investigators said there was some sort of confrontation between the man and the officers and a police firearm was discharged.

Sources have told CP24 that the man was armed with a handgun when he was shot. He was rushed to hospital, where he was later pronounced dead.

He has since been identified by family as 21-year-old Alex Wettlaufer.

“Alex does not carry a gun, he’s never had a weapon, and he (doesn’t) own a weapon,” Wendy Wettlaufer, Alex’s mother, told reporters Monday afternoon.

She said her family spoke to her son in the moments before he was fatally shot.

“He was crying, saying that he’s being surrounded,” she said.

“They kept telling him to put the weapon down, and he kept hollering telling them he didn’t have a weapon.”

“He is not really a fighter and he wouldn’t have turned around and ruined everything because he was going into the army."

The SIU is an arm's-length agency that investigates anytime police are involved in death, serious injury or allegations of sexual assault.

Anyone with information is asked to contact investigators at 800-787-8529.

A man is in hospital after a shooting in North York overnight. (Mike Nguyen/ CP24)