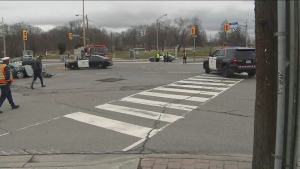 The province's police watchdog are investigating a collision in North York that injured two people on Saturday, April 4.

The province’s police watchdog is investigating after two people were injured in a multi-vehicle collision in North York Saturday morning.

Emergency crews were called to the area of Keele Street and Sheppard Avenue at around 10 a.m. following a crash involving a TTC bus and a vehicle.

Toronto paramedics said two people – a man and a woman -- from the vehicle were taken to a trauma centre with non-life-threatening injuries.

A TTC spokesperson said there were no injuries to the driver or passengers.

The vehicle allegedly ran the red light, and the TTC driver tried to avoid colliding with the vehicle, the spokesperson said.

In a news release, the Ontario Provincial Police said a member of the Toronto Detachment was observing the vehicle before the collision.

The Special Investigations Unit has invoked its mandate, the OPP said.

The province's police watchdog are investigating a collision in North York that injured two people on Saturday, April 4.