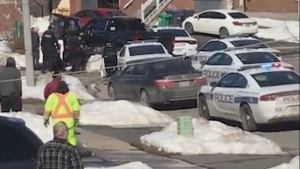 The SIU are investigating a police interaction in Brampton that left a man injured. (YouTube)

The province’s police watchdog has invoked its mandate after a man was injured during an interaction with Peel police in Brampton Friday morning.

Police were called to a parking lot of a plaza in the area of West Drive and Queen Street East around 11:15 a.m. for a fight.

He then fled the area.

Police said they later located and stopped the man on Hansen Road North, near Abell Drive.

A video of the incident has been posted on social media. It appears to show several cruisers striking a truck as they try to prevent it from escaping.

Police said shortly after, the officers and the driver became involved in an interaction.

The driver was later taken into custody and was transported to a hospital with non-life-threatening injuries, police said.

The Special Investigations Unit, which investigates any incident involving police that results in death, serious injury or an allegation of sexual assault, was notified about the incident Friday evening.

The SIU are investigating a police interaction in Brampton that left a man injured. (YouTube)