SIU on scene of fatal crash in New Tecumseth 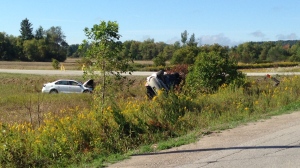 The SIU is on the scene of a crash in New Tecumseth. (Cam Woolley/ CP24)

The province’s police watchdog is on the scene of a fatal crash in New Tecumseth this morning.

Police have released few details about the collision, which occurred at around midnight in the area of Line 5 and Sideroad 20.

Reports from the scene suggest a vehicle being pursued by police crashed into another car, causing both vehicles to leave the roadway and land in a nearby ditch.

A source tells CP24 that the person killed in the crash was not in the vehicle that was being pursued by officers.

The age and gender of the victim has not been released.

The area is closed to traffic while an investigation is conducted.

The SIU is an arm’s length organization called in to investigate whenever police are involved in a death, serious injury, or allegations of sexual assault.