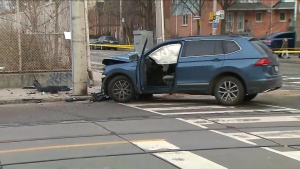 The scene of a collision is pictured at Parliament and Shuter streets Friday December 13, 2019.

The province’s Special Investigations Unit is probing a collision in Regent Park that sent a man to hospital with a shoulder injury.

The incident occurred on Parliament Street between Queen and Shuter streets shortly before 8 a.m.

According to preliminary information, a Toronto police officer began investigating a vehicle of interest in the area of Jarvis Street and Gerrard Street, the SIU said.

The vehicle travelled south on Jarvis Street, and then went east on Shuter Street.

The SIU said the vehicle struck a light pole at the intersection of Shuter Street and Parliament Street.

The driver, a 40-year-old man, was apprehended and taken to hospital with a serious injury, the police watchdog said.

Toronto Paramedic Services said he was transported to hospital with injuries deemed to be minor at the time.

A witness who works near the scene told CP24 that a vehicle was travelling through the area at a high rate of speed when it crashed. He said a police vehicle followed closely behind with its lights and siren on.

“We more so heard the car go by and then a loud bang following,” said the witness, who identified himself as Zack. “Then upon going outside we saw a vehicle in a pretty bad state crashed into a pole.”

He said he then saw an officer approach the crashed vehicle with caution.

The Special Investigations Unit is an arm’s length agency called in to investigate whenever police are involved a in a death, injury, or allegations of sexual assault.

At around 2:30 p.m., Toronto police said that the SIU had invoked their mandate.

The intersection of Parliament and Shuter streets has been shut down since the collision. TTC vehicles are diverting around the area.

The scene of a collision is pictured at Parliament and Shuter streets Friday December 13, 2019.