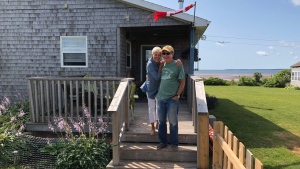 Renee Huart-Field and her husband, Mike Field, are pictured outside their home in Little Pond, P.E.I., in this undated handout photo. A couple of years ago, Huart-Field and her husband packed up their lives in Bracebridge, Ont., in pursuit of the retirees' dream. And for a while, they were living it. But now, Huart-Field says she's among the many snowbirds whose cross-border lifestyles have been derailed by the COVID-19 pandemic. THE CANADIAN PRESS/HO - Guy Fortin

A couple of years ago, Renee Huart-Field and her husband packed up their lives in Bracebridge, Ont., in pursuit of the retirees' dream.

And for a while, they were living it. The couple loaded most of their worldly possessions into a trailer, and with their two golden retrievers in tow, started splitting their time between two picturesque destinations.

During the warm months, they retreated to their home along the red bluffs of Little Pond, P.E.I. And when the Maritime cold sets in, they hit the road and head for the sunshine of Florida's Gulf Coast at their other property in Englewood.

But now, Huart-Field says she's among the many snowbirds whose cross-border lifestyles have been derailed by the COVID-19 pandemic. And despite having two homes, the 63-year-old says neither seems like a suitable place to wait out the winter months.

Last Friday, authorities announced that the partial closure of Canada's border with the U.S. will be extended until Oct. 21. While the restrictions don't apply to entry to the U.S. by plane, land crossings are limited to essential travel.

Huart-Field and her husband aren't keen on flying because of their canine companions, so if the rules remain in place, it seems like heading to Florida is off the table. And at their age, Huart-Field said braving the cold by themselves on the remote shores of P.E.I. also doesn't seem feasible.

The couple is contemplating a return to Ontario, or perhaps finding a rental in Charlottetown. But amid all the uncertainty about travel rules, insurance coverage and public health risks, Huart-Field said Canada's snowbird community has been left without many good options.

"People sort of think well, gee, must be nice to have that dilemma. But it's not, " said Huart-Field. "As you get older, the winters become harder... It's a health thing."

Dr. Monika Dutt, a public health physician based in Sydney, N.S., said snowbirds have a host of health concerns to consider in deciding whether to migrate south this winter.

Snowbirds tend to be older, so they're more likely to have underlying health conditions that put them at greater risk of COVID-19 complications, said Dutt.

Many popular winter destinations, including several U.S. states such as Florida and California, have struggled to contain their COVID-19 outbreaks, she said. Relatively speaking, Dutt said many parts of Canada have been more effective at reducing rates of infection.

But there are other health factors to consider, said Dutt, ones that can't be measured by a comparison of new COVID-19 cases on either side of the border.

Between physical distancing precautions and icy conditions that can limit mobility, Dutt said many older Canadians may suffer from isolation this winter. This can increase their risk of falls, cognitive decline and substance use, she said.

To make informed winter plans, Dutt recommends that snowbirds familiarize themselves with the Canadian government's travel advisories, public health measures at their intended destination and quarantine requirements upon arrival and return.

"You need to decide is it better for you to be at home where you're potentially near support and family and a health-care system that you know you can depend on, versus being somewhere else in the world?"

Karen Palmer, an independent health policy analyst and adjunct professor at Simon Fraser University, also said it's critical that snowbirds consider the perils of relying on a foreign health-care system.

Some jurisdictions may not have the medical infrastructure to treat an influx of international patients, which could pose a risk to travellers and local populations, said Palmer.

"By that I mean every word of the policy, word for word, and make sure that you understand what is included and what is excluded."

In the U.S., Palmer said hospital bills can run into the hundreds of thousands of dollars, and provincial health insurance plans offer limited out-of-country coverage, particularly for trips that contravene federal travel recommendations.

Some insurance providers, including Manulife and Medipac, are rolling out travel policies that promise emergency medical coverage for COVID-19 and related conditions.

In a July advisory, the Canadian Life and Health Insurance Association told consumers to contact their insurers before they cross the border for more information about their coverage.

But Palmer warns that most policies come with provisos that could leave snowbirds in the lurch if they get infected. For example, she said there are often exemptions for people with pre-existing conditions, and certain COVID-19 complications may not be covered.

"Just because you could travel doesn't mean you should travel," Palmer said. "It may be the year to give a really hard think about whether you should go. Maybe find another way to stay sane through the winter, or at least delay it until we have a really strong sense of where COVID is going."

The president of Snowbird Advisor, an online resource for Canadians interested in cross-border living, said he hasn't seen the same level of seasonal planning as in previous years.

"We don't think it's appropriate for anybody to be encouraging anybody to travel right now, or necessarily discouraging," Stephen Fine said. "What we try to do, and we hope that others do the same, is provide information to allow individuals to make their own choice."

A significant share of snowbirds drive across the border each year, so the partial closure of the U.S.-Canada land border has proved to be a powerful hurdle for many people, said Fine. Some snowbirds are hiring services to ship their cars south, he said, but that isn't an option for everyone.

Among those most affected by the travel restrictions are people who lack permanent winter housing in Canada, instead opting to live in summer cottages or mobile homes, said Fine.

Some snowbirds are campaigning for authorities to open up the land border to people who live in the U.S. seasonally. Neither Global Affairs Canada nor U.S. Customs and Border Protection directly addressed questions about whether such exceptions were under consideration.

With so much uncertainty swirling, Fine said most snowbirds are taking a "wait and see" approach to their plans for the season. But he said there are passionate factions on either side of the stay-or-go debate.

Some holdouts want to see how the U.S. election unfolds this November, while others say they don't trust American officials to effectively contain the COVID-19 crisis, regardless of the polls. And as they age, the potential health risks outweigh the benefits of sunbathing in February.

"We'll certainly miss the warm weather. There's no question about that," said Elmer Brooker, 89, on his and his wife's decision to endure the Edmonton winter rather than making their annual pilgrimage to California. "There's no point in poking your head into danger when you know that it's there."

But swaths of other snowbirds seem determined to head south this winter.

As some of these sun-seekers see it, both Canada and the U.S. will have to reinstate strict public health measures if a second coronavirus wave hits. And if that's the case, they'd rather be housebound by the beach than snowed in closer to home.

Cory Charron, 49, of Ottawa said he and his wife aren't naive about the dangers of travelling to their property in Punta Gorda, Fla., during a pandemic, but they also have to consider their health conditions that are worsened by the cold climate.

It's not like the couple will be able to enjoy their usual Florida fare, said Charron. Cruises, restaurants and community get-togethers are all off the table.