Soldier dies after being shot during training exercise on Alberta military base: defence department 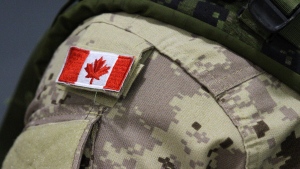 A Canadian flag patch is shown on the shoulder of a member of the Canadian forces in Trenton, Ont., on Thursday, Oct. 16, 2014. Canadian troops returning from Ukraine this month have not been told whether they will allowed to quarantine at home with their families or forced to spend the two weeks somewhere else. (THE CANADIAN PRESS/Lars Hagberg)

A Canadian soldier died Saturday after being shot during a training exercise at a military base in Alberta.

The soldier suffered a gunshot wound late Friday night while taking part in live fire training at CFB Wainwright, the Department of National Defence said in a statement.

“We extend our deepest condolences to the family and friends of our fallen soldier,” the statement reads. “The Canadian Armed Forces will be there to support the family during this difficult time.”

The soldier was treated for injuries at the scene shortly after the 10 p.m. incident occurred, the department said. The soldier was eventually airlifted to an Edmonton hospital but died on Saturday morning, the statement added.

The department offered no other details about the circumstances that led to the incident.

The soldier's identity will not be released until next of kin can be notified.

“On behalf of all ranks of the CAF, I offer my condolences to the family and friends of our fallen soldier,” said Gen. Jonathan Vance, chief of the defence staff, in a tweet.

“My thoughts are with the family and friends of the Canadian Armed Forces' member who we tragically lost in a training accident in Wainwright, Alberta,” he wrote. “We will be there to support the family during this difficult time. The Canadian Forces have started a thorough investigation.”

Tragically, a member of the Canadian Armed Forces lost their life during a training exercise in Wainwright, Alberta. Our hearts go out to their loved ones and @CanadianForces colleagues. Know that we are mourning with you and are here to support you during this difficult time.