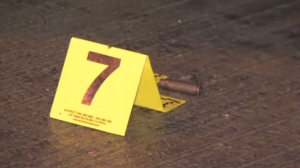 A shell casing is seen in the Sheppard and Longmore area on Mar. 29 after a shooting took place near a strip mall. (CTV News Toronto)

Toronto police’s “Project Community Space” was a success even if the rate of shootings climbed during the period it was active, a senior police official said Friday, pointing to an increase in the number of “solved” gun crimes during the 15-week blitz.

Supt. Steve Watts said gun crime may have increased during the period from Aug. 14 to now, but they did arrest 463 people, representing an increase in the “solve rate” for gun crimes.

“I can speak to that the solve rates for shootings during that time period were significantly higher than prior,” he told a reporter. “So that’s a different aspect to just the total number of shootings.”

The disturbing trend that started over the Aug. long weekend continued through the month, with 29 shootings reported in the city.

September, October and November each saw higher numbers of shootings than earlier in the year, with a total of 75 incidents during that span that resulted in death or injury.

He later said the number of arrests made in response to non-fatal shootings was higher than it has ever been.

“What is encouraging is of the number of those shot, we solved a very high percentage of these occurrences and that’s something that has not happened before.”

During the project, police increased their presence in high crime areas, participated in a bail compliance initiative and increased their community engagement. An unspecified number of officers were also reassigned to the Integrated Gun and Gang Task Force.

The project was initially supposed to conclude on Oct. 31 but it was ultimately extended for another month.

It was funded by $4.5 million granted by all three levels of government.

Police confirmed all of the money granted was spent by December.

Watts said more than 1,100 hundred charges were laid during the effort, and close to 250 guns were seized.

Of the 463 persons charged, he said that more than one fifth of them were out on bail for prior gun offences at the time of their most recent arrest.

Of the 97 arrested while out on bail for a prior gun offence, 16 of them were hit with new gun offences.

The Toronto Police Services Board said in a statement Friday that its members were pleased with the impact it made, but highlighted the problem of those accused in gun crimes securing bail and in some cases becoming accused in further gun crimes.

“The Board shares Chief Saunders’ concerns about individuals who have committed serious firearms-related offences being released on bail, and recognizes the significant public safety risk that may be posed by such individuals,” a portion of the statement read.

Watts said he was “happy” with the effort but said only a more comprehensive approach by the education sector, social services and community agencies would dissuade more people from engaging in a criminal lifestyle and carrying firearms.

“Our children are not born gangsters – it’s not a biological imperative, it’s heavy environmental conditioning,” he said.

Part of Project Community Space involved identifying people at risk of falling into a criminal lifestyle and directing them to social services agencies for support.

Watts’ comments highlighted the tension experienced by law enforcement between prevention before a crime occurs and investigation and apprehension afterwards.

He said police services are set up to investigate crimes and apprehend those accused, while prevention is something all of society must be engaged in.

“By the time someone is 16 or 17 years old and decides to shoot me in the chest- there’s a lot of water that’s passed under bridge by that point.”

A shell casing is seen in the Sheppard and Longmore area on Mar. 29 after a shooting took place near a strip mall. (CTV News Toronto)