Some kids' pain meds in short supply, but pharmacists say prescription not needed 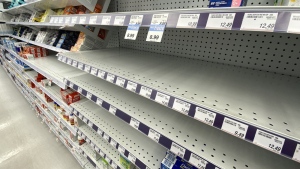 TORONTO - Ontario drugstores are facing shortages of common children's pain relievers as stocks run low in other parts of the country, say pharmacists, suggesting that an unexpected summer spike in respiratory illnesses is driving up demand for the drugs.

Some Canadians retailers are struggling to maintain inventory of over-the-counter drugs containing acetaminophen, which is known by the brand name Tylenol, or ibuprofen, the generic version of Advil. In particular, liquid pain relievers for children have been hard to keep in stock.

But even if some stores are sold out, parents still don't need a prescription to purchase liquid Tylenol or Advil, say pharmacists, noting that there are other formulations that will make their little ones feel better.

The supply crunch is concentrated in urban centres in Ontario, but there have been reports of sporadic, community-specific shortages in other parts of the country, said Barry Power, editor-in-chief of the Canadian Pharmacists Association.

While manufacturers have been hampered by supply chain interruptions, Power said he suspects the spread of COVID-19 is driving up demand for pain and fever medication.

“COVID activity over the summer has been a lot higher than anticipated based on previous years,” he said. “If there's a community where there's high COVID activity, there's a higher likelihood they're going to have shortages.”

Drug manufacturers are ramping up production to get these pain relievers back in stock come fall cold and flu season, Power added.

Some pharmacists have had no option but to order stock bottles that run between half a litre and a litre, and are typically reserved for people following doctor's orders, she said.

Pharmacists can dispense small batches of medication from these bottles without a prescription, said Belcher, but customers will have to wait while they're being prepared.

But even if a child's preferred cherry-flavoured syrup isn't on the shelves, there are alternatives that will do the trick, Belcher said.

Chewable tablets are available for kids who will tolerate them, Belcher said, and in some cases, medication might not be needed to manage symptoms. She advised that parents consult with their pharmacist or another health provider before making any changes.

“A lot of people don't have a family physician,” said Power. “Let's not drive people into doctors' offices and pharmacies with prescriptions if we don't need to.”

Health Canada said it's aware that some acetaminophen and ibuprofen products for children are in short supply on the local level, and is working with stakeholders to address the problem, which has caused intermittent stock shortfalls since earlier this year.

“Health Canada urges patients not to buy more medications than usual,” spokesman Andre Gagnon said in an email. “This will help ensure that all Canadians continue to have access to the medications they need, and it will also help prevent drug shortages.”

Two Ontario children's hospitals have taken steps to maintain supplies of liquid Tylenol and Advil for patients who are admitted, and are helping find solutions for children who are discharged.

In a letter addressed to caregivers earlier this week, Toronto's Hospital for Sick Children said health workers would provide prescriptions for the liquid form of acetaminophen.

Some retailers may have these over-the-counter drugs in stock, while others may only have large bottles that need to be dispensed by a pharmacist, SickKids said in a statement Tuesday following news coverage of the memo.

“Dear Caregiver letters are routinely distributed to patients and families,” SickKids said. “The letter was not intended as a recommendation for the general public.”

In Ottawa, CHEO said it was among the pediatric health centres feeling the strain on supplies of liquid acetaminophen and the generic version of Advil, ibuprofen.

The hospital encouraged parents to ask their pharmacist about alternatives for fever and pain management, spokesman Paddy Moore said in an email.

Tylenol's manufacturer said its children's products are still available in stores and online.

“We continue to experience increased consumer-driven demand and are taking all possible measures to ensure product availability,” Johnson & Johnson said.

A spokesman for Food, Health & Consumer Products of Canada, an industry group that counts Johnson & Johnson as a member, said there are “pockets” of Canada where shortages have happened, but downplayed the severity of the issue.

“In many cases, if there's a shortage at a particular pharmacy, those parents that are looking for that product are able to go to a secondary pharmacy and often find it without that much trouble,” said Anthony Fuchs.