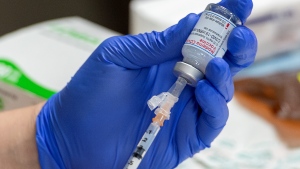 A registered nurse prepares a dose of the Moderna vaccine to Halifax on Monday, Jan. 11, 2021. (Andrew Vaughan / THE CANADIAN PRESS)

TORONTO - Refocusing Ontario's COVID-19 vaccine rollout on long-term care residents would prevent 115 deaths and hundreds more cases by the end of March, according to projections from a team of experts advising the government on the pandemic.

The report predicted that giving a first dose to all long-term care residents by Jan. 31 would save lives, and speeding up the rollout would be even more effective.

It concluded the January date would prevent 600 people from becoming infected, compared with the government's current plan to vaccinate all long-term care residents by Feb. 15.

The Ontario COVID-19 Science Advisory Table made the forecasts in the report published Thursday by modelling best and worst outcomes from three vaccine rollout scenarios up to March 31.

It also looked at the potential impact if all residents had been vaccinated by Jan. 21, finding in a best-case scenario, hundreds of lives could potentially have been saved before March 31.

“If vaccine supply is limited, the early provision of first doses of a COVID-19 vaccine to (long-term care) home residents is likely to be more beneficial than the on-schedule provision of second doses to health care workers outside of LTC homes,” the report said.

The findings came as the province reported active COVID-19 outbreaks in 244 long-term care homes as of Friday -- 39 per cent of all homes in the province.

Throughout the pandemic, advocates and families have continuously called for stronger action to protect those in long-term care, with fears growing about the potential for deadlier outbreaks as new variants of the virus appear in Ontario.

Jennifer Penney's mother died on Dec. 26 after she was infected with COVID-19 during an outbreak at her Niagara Falls, Ont., care home.

On Friday, an emotional Penney described her family's struggle to get information about her mother's condition as she spoke at a news conference organized by the Ontario Health Coalition, an advocacy group with representatives from various unions and health-care groups in the province.

Penney's family received a call on Christmas Day that her mother wouldn't survive the night. They arrived at Oakwood Park Lodge with no staff available to greet them, finding other residents wandering the halls, calling out for help and access to water, Penney said.

Penney's mother died shortly after her family arrived in her room.

“In the following days, we weren't able to grieve the loss of my mom. We were more focused on the residents that were left behind,” Penney said.

She said she wants to see improvements for seniors being neglected in similar, “horrific” outbreak situations across the province.

Asked Friday whether the province would adjust its vaccine rollout plan based on the advisory table's report, a spokeswoman for Health Minister Christine Elliott said the schedule depends on supply.

“We continue to vaccinate long-term care home residents as quickly as we receive vaccines from the federal government,” Alexandra Hilkene said in a statement.

NDP Leader Andrea Horwath responded to the advisory team's projections by calling on the government to move up the Feb. 15 target.

“It would be unconscionable to look at the evidence in front of us and choose not to save lives by ramping up protections and vaccinations in long-term care,” she said in a statement on Friday.

“We are failing residents in long-term care and the government's February 15 vaccination target is simply not good enough. It will cost lives,” Fraser said in a Friday statement responding to the new report.

As of Friday, 3,298 long-term care residents had died from COVID-19, and 13,746 had tested positive for the illness, according to government figures. Forty-two deaths were reported between Thursday and Friday.

Based on figures as of Jan. 17, long-term care residents accounted for more than 59 per cent of Ontario's total deaths from COVID-19.

On Friday, Ontario reported administering 11,168 doses of a COVID-19 vaccine since the last daily report, with a total of 264,985 doses given since inoculations began in December.