Staff who refused work at elementary school dealing with COVID-19 outbreak will make their own decisions on when to return: union 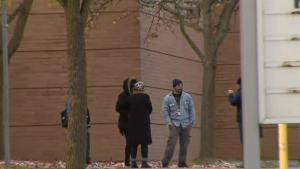 Staff at Glamorgan Junior Public School stand outside the building during a work refusal on Nov. 2, 2020. (CP24)

A number of staff at a Scarborough elementary school with 11 confirmed COVID-19 cases and another 58 students in self-isolation refused to work there on Monday and it is unclear whether they will return to their classrooms tomorrow.

The work refusal left only 11 adults to supervise children who remained at the school by mid-morning on Monday.

But the school remained open, with 58 students who were learning in one “wing” of the building ordered home to self-isolate for 14 days.

Teachers at the school issued a statement anonymously to CP24 saying that they believe staff members from the isolated “wing” travelled to other parts of the school during the school day, presenting a risk to remaining staff and students.

They say they asked the principal and the Toronto District School Board to close the school or add new safety measures but that did not occur.

As a result, an unspecified number of staff at the school are refusing to enter and work.

Don MacMillan of CUPE told CP24 that early childhood educators are also part of the work refusal, calling it a “terrible situation to be in.”

In response to the work refusal, the TDSB sent four vice principals and support staff to the school.

By midday, there was a principal and vice principal, four vice principals brought from other schools, one occasional teacher, three lunchroom supervisors and one YMCA supervisor with the children at the school.

A total of 186 children showed up for school but that number dwindled as parents became aware of the work stoppage and brought their children back home.

At this point it remains unclear whether the staff will return to work tomorrow.

In an interview with CP24 on Monday afternoon, Elementary Teachers of Toronto (ETT) President Jennifer Brown said that will ultimately be up to each individual.

“Because this is an individual work refusal what the teachers do will depend on what they hear as a response from the Ministry of Labour to their direct concerns,” she said.

Toronto Public Health also provided a statement to CP24, noting that its investigation “does not indicate that we need to close the other wing of the school” at this time.

Brown, however, said that there remain a number of unanswered questions.

“The fact that it is in one area of the school gives rise to questions about whether it is something to do with ventilation. Is it going to permeate through the building?” she said. “We know that the government hasn’t funded for fixing the schools in a regular type of way so how is this being addressed? There are issues that have not been answered.”

In a statement provided to CP24, the Ministry of Labour said a health and safety inspector visited the school on Oct. 29 and no orders were issued. The ministry statement said province is continuing to receive updates on the situation at the school.

“The employer is conducting an internal investigation,” the statement read. “At this time there is no further action required by our ministry as parties are required to investigate work refusals internally before calling the ministry.”

Staff at Glamorgan Junior Public School stand outside the building during a work refusal on Nov. 2, 2020. (CP24)