State of mind to be key issue in Alek Minassian trial, judge says 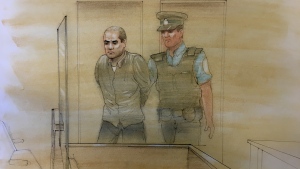 TORONTO -- The trial of a man accused of killing ten people in a deadly Toronto van attack will turn on his state of mind at the time, not whether he was behind the wheel, a judge said Friday.

Justice Anne Molloy, who will oversee Alek Minassian's trial next year, made the comments as she ordered a publication ban to be lifted next month on what the 26-year-old told police hours after his arrest.

Minassian's lawyer had sought the ban in order to prevent the potential tainting of witnesses at trial, which will begin Feb. 10, but Molloy rejected the argument.

"It is hard to imagine a witness being called who will not already know that Mr. Minassian drove a van down a Toronto sidewalk killing and injuring many people," she wrote in her decision. "The central issue at trial will be Mr. Minassian's state of mind at the relevant times."

Minassian is charged with 10 counts of first-degree murder and 16 counts of attempted murder in the incident that took place on Yonge Street on April 23, 2018.

Several media organizations -- including The Canadian Press -- fought the defence request for the publication ban, which will now be lifted on Sept. 27.

Pre-trial documents are usually protected by a standard publication ban designed to protect a jury from being tainted.

In late June, both the Crown and the defence agreed to proceed with a judge-alone trial, leading to a media attempt to publish Minassian's police statement. That prompted defence lawyer Boris Bytensky's push for a publication ban.

Molloy said the defence argument to keep Minassian's police statement from being made public even during the man's trial would have been a "colossal affront" to the concept of the openness of the judicial system.

"This was a tragedy with a wide and devastating impact within the Toronto community and beyond. People want to know why it happened," Molloy wrote. "They are entitled to know what is happening at the trial devoted to finding the answer to that question."

Minassian, who sat hunched over in the prisoner's box wearing a grey shirt, showed little reaction as the judge delivered her decision in court.

Molloy said the police statement will be one of the Crown's most important pieces of evidence at trial.

"Mr. Minassian did confess to being the driver of the van, but this will not be a controversial issue at trial," she wrote.

"Mr. Minassian's arrest beside the van he had been driving was broadcast on television moments after it happened and was viewed by thousands of people, likely including those prospective witnesses who knew him, as it was available on the internet for all to see."

A publication ban will also be lifted on details about two other related criminal cases, including one involving a man in London, Ont., facing charges "relating to a potential threatened attack there, possibly inspired by the Toronto van attack," Molloy wrote.