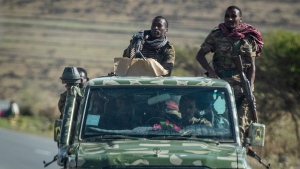 In this Saturday, May 8, 2021 file photo, Ethiopian government soldiers ride in the back of a truck on a road near Agula, north of Mekele, in the Tigray region of northern Ethiopia. (AP Photo/Ben Curtis, File)

Ottawa should stop sending millions of dollars in aid to the Ethiopian government and push for creating a no-fly zone and delivering air-dropped food aid to the people of the Tigray region, who have been under attack from the federal military for nearly eight months, advocates say.

Azeb Gebrehiwot of the Association of Tigrayan Communities in Canada said Canadians should know their taxpayer money is funding the Ethiopian government, which has been committing atrocities in Tigray.

“We, Tigrayans in Canada, we are so, so disheartened by our Canadian government, because you have the U.S., European Union, the U.K. strongly, strongly speaking out against what's happening in Tigray,” she said.

Gebrehiwot, who immigrated to Canada 18 years ago, said the Ethiopian government completely shut off communication in the region, preventing her from reaching her family as Ethiopian and allied forces pursued a military operation in Tigray.

The conflict has led to the world's worst famine crisis in a decade, with more than 350,000 people facing starvation, according to the UN and other humanitarian groups.

Ethiopia's government on Monday declared an immediate, unilateral ceasefire in the region. The announcement was carried by state media shortly after the Tigray interim administration, appointed by the federal government, fled the regional capital, Mekele, and called for a ceasefire on humanitarian grounds so that desperately needed aid can be delivered.

The ceasefire, which Ethiopia said will last until the end of the crucial planting season in September, could calm a war that has destabilized Africa's second-most populous country and threatened to do the same in the wider Horn of Africa, where Ethiopia has been seen as a key security ally for the West.

Ethiopia is one of the largest recipients of Canada's international aid. The East African country had received almost $2 billion in aid from Canada between 2010 and 2019, according to the Canadian International Development Platform, a data-collecting initiative that operates out of Carleton University.

Global Affairs Canada did not immediately respond to a request for comment.

Yohannes Abraha, a former director at Ethiopia's Foreign Affairs Ministry who came to Canada last year, said the Ethiopian government started a smear media campaign and made budgetary cuts of federal subsidies for the region three years ago, which laid the ground for the conflict in Tigray that started in November.

He said the conflict has political and historical roots and there are regional factors that played a role in escalating it.

The government of the Amhara region, whose forces fought with the federal government in Tigray, resents how the Tigrayan leadership has been pushing for a strong federalist system in which states have more power, while Amhara has supported efforts to centralize power in the capital.

“The Amhara wanted a unitary Ethiopia. No federalism, no border, just a unitary and unified Ethiopia, without recognizing the different nationalities in the country, the different identities,” Abraha said.

Abraha also said Eritrean President Isaias Afwerki sent his forces to fight in Tigray with Ethiopia's federal government because he wanted to be a patron of the Horn of Africa and the leadership of Tigray appeared to be the only obstacle to him as the region continued to be a safe haven for Eritrean refugees and political opposition.

Ethiopian Prime Minister Abiy Ahmed, who won the 2019 Nobel Peace Prize, wanted to neutralize all political powers in the country's regions, and the only region that resisted this move was Tigray, said Abraha.

“Ahmed is coming to power to become the king in Ethiopia,” he said.

Ahmed's transformation from making peace to waging war has appalled many observers since the fighting in Tigray erupted. Since then, the world has struggled to access much of the region and investigate growing allegations of atrocities including gang rapes and forced starvation.

Tag Elkhazin, a senior fellow at Carleton University's Norman Paterson School of International Affairs, said Ahmed is facing more challenges than ever, but that doesn't necessarily mean he will lose power as the country awaits the results of national elections.

Elkhazin said the rise of voices in Tigray that are calling for self-determination will likely create new dynamics that can escalate the conflict.

The international community can pressure Ethiopia by stopping funding to its government and levying sanctions on those who led the military activities, including Ahmed, he said.

“This is protracted. It is not going to end today or tomorrow or in a year or two.” he said. “Both parties are bent on fighting.”