Strong support for safe injection sites but most don't think neighbours would support one: poll 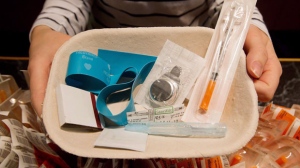 Registered nurse Sammy Mullally holds a tray of supplies to be used by a drug user at the Insite safe injection clinic in Vancouver on May 11, 2011. (The Canadian Press/Darryl Dyck)

Nearly two-thirds of Torontonians say that they are supportive of safe injection sites but more than half believe that their neighbours wouldn’t welcome a facility if it was located nearby, a new poll from Forum Research has found.

Despite the support, though, when it came to the question of locating a supervised injection site in their neighbourhoods most respondents felt that the facility wouldn’t be welcome.

“It’s true that the majority of Torontonians approve of safe injection sites in general, but it’s also true that a majority says a site wouldn’t be welcomed in their neighbourhood,” Forum Research President Lorne Bozinoff said in a press release. “It suggests that people are conflicted on the issue: they know that safe injection sites serve a purpose, but they feel as though their community would prefer if the sites were outside of their own neighbourhood.”

Last month, the provincial government announced that it would fund six supervised injection sites in Toronto but not two others that had previously received funding.

At the time, Premier Doug Ford told a reporter that if he were to put a facility “beside your house, you’d be going ballistic.”

“I want to try to help these people. It’s ok. Ya help em,' but not in my backyard. That’s the reality of things,” he said at the time.

In addition to gauging respondents feelings in general about supervised injection facilities, the poll did also ask about the recent provincial cuts and found that 65 per cent of people disapprove of them.

The Forum Research poll is considered accurate to within three percentage points, 19 times out of 20.