Strong winds cause significant damage across GTA, thousands without power 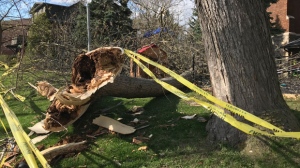 A toppled tree is seen outside a daycare in Toronto's west end, after a severe wind storm on Friday, May 4, 2018. (Brian Carr/CP24)

A thunderstorm packing heavy winds, hail and sustained rains felled trees across the GTA on Friday afternoon, leading to the death of two people and causing widespread damage to homes and neighbourhoods.

The turbulent weather conditions are also to blame for a temporary ground stop at Pearson Airport.

For more than two hours, all incoming and outgoing flights were halted by the traffic control measure, which slows or stops the flow of air traffic to an airport. The order was lifted shortly after 8 p.m. but many travellers were left to face delays and cancellations.

Meanwhile, the powerful winds knocked out electricity to thousands of residents in Toronto and the GTHA.

Though crews have been dispatched to problem areas, Toronto Hydro said restoration is being hampered by the high winds.

"We're doing our best to get out to these scenes and start working on the restoration," spokesperson Tori Gass said. "Our crews, they can't go up in the bucket trucks in some situations."

Hydro One said about 180,000 of its customers have been impacted, stretching from southwestern Ontario into eastern Ontario.

“Crews are out and working to restore power,” spokesperson Nancy Clark said. "That number could increase throughout the evening.”

The damage left in the aftermath of the short-lived storm had Toronto Fire Services "running on maximum."

Chief Matthew Peg said Friday was busiest night the service has seen since the ice storm of 2013.

"We're doing really well now. We're down to a waitlist of only 15 calls and they are clearing very quickly," Pegg told CP24 via phone. "Hopefully things will stay quiet for us for the rest of the evening."

Pegg said the amount of weather-related calls the dispatch centre received was “extreme” and that calls had to be prioritized based on the severity of the incident.

The dangerously high winds, some of them up to 100 kilometres per hour, also caused the temporary closure of the Burlington Skyway. Ontario Provincial Police reopened access just after 8 p.m.

The TTC also experienced a number of issues as a result of the weather conditions, including suspensions and diversions. All subway trains were ordered to slow to 30 km/h in all above ground portions of track and fallen trees created delays on both Line 1 and 2 during the evening rush. Normal service resumed sometime after 8 p.m.

GO Transit riders were not spared the weather's wrath. At the peak of the storm, delays of up to 60 minutes were reported across the network.

The UP Express was suspended for several hours due to the wind but full operations resumed by 10 p.m.

"GO Transit is gradually trying to get back to normal," Aikins said. "There were so many things damaged...  We had crossing arms bent and broken, lights taken right off their hinges from the wind. It was pretty incredible."

Aikins said she expects the network to be running normally by morning.

In Milton, Halton Regional Police say a tree service worker died and another was critically injured after a tree they were working on collapsed.

A man also died in Hamilton after he police say he tried to move downed live wires, according to local police.

In Etobicoke, paramedics said a man in his 50s was struck by a falling tree in the Bloor Street West and Windermere Avenue area of Etobicoke. He was taken to local hospital for treatment of undetermined injuries.

In Toronto’s Bloorcourt village, a large sign fell off the front façade of a business in the Bloor Street West and Dovercourt Road area, but no one was injured.

In Mississauga, wind knocked a tree onto the front of a school bus in the Sayers and Clarkson roads area at about 3:27 p.m.

Peel Regional Police said 27 kids, aged seven to ten, were on board at the time of the incident.

No children were injured. They were transferred onto another bus and made it home safely.

Weather to calm by late evening

Environment Canada says that a low pressure system is to blame for the sustained southwest of up to 90 km/h.

The weather agency says that gusts approaching 110 km/h were possible throughout the storm.