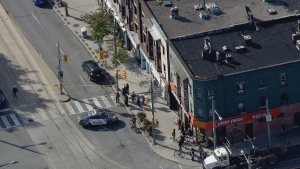 Toronto police have blocked a portion of St. Clair Avenue West at Oakwood Avenue after a shooting left a man injured. (CP24)

A student was seriously injured following a shooting near Oakwood Collegiate Institute in the city’s St. Clair West Village neighbourhood.

Shots rang out in the area of St. Clair and Oakwood avenues at around 2:30 p.m. on Friday.

Insp. Darren Alldrit told reporters that preliminary information suggest two men were involved in an altercation. Witnesses told police that they both pulled out firearms and shot each other.

One of the men fell to the ground, Alldrit said, before both fled the scene on foot.

At some point, the man who fell to the ground came back and sought medical attention at Oakwood Collegiate, he said.

The man sustained a gunshot wound to his abdomen, Alldrit said. He was rushed to a hospital where he remains in serious but stable condition.

Toronto District School Board spokesperson Shari Schwartz-Maltz told reporters that the victim is a student of Oakwood Collegiate Institute. She said it was the school's vice-principal who performed first aid.

"Thank God he came in. He had a safe place to go," she said.

Schwartz-Maltz said everyone in the school was scared but staff are properly trained for incidents like these.

The school was in a hold and secure due to the police activity in the area but it has since been lifted.

She also said counsellors attended the school Friday and will return on Monday to assist students and staff.

"This is not a random incident," Alldrit said. "This sounds like some kind of a targeted incident."

Police said they have located firearms following a search around the neighbourhood.

The suspect is described as a black male, in his teens and dressed in dark clothing.

Toronto police have blocked a portion of St. Clair Avenue West at Oakwood Avenue after a shooting left a man injured. (CP24)