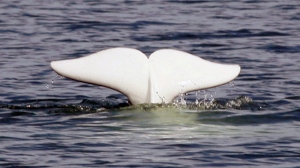 A beluga whale shows his tail in the St.Lawrence River near Tadoussac Que., Monday, July 24, 2006. THE CANADIAN PRESS/Jacques Boissinot

VANCOUVER - A pioneering study of seven belugas in Canada's remote Arctic waters has found microplastics in the innards of every single whale.

Researchers from Ocean Wise worked with hunters from the Inuvialuit community of Tuktoyaktuk, N.W.T., to collect samples from whales they harvested between 2017 and 2018.

They found an average of nearly 10 microplastics, or particles less than five millimetres in size, in the gastrointestinal tracts of each beluga.

The study was published last week in the Marine Pollution Bulletin and conducted in partnership with Fisheries and Oceans Canada and Simon Fraser University.

Ocean Wise says it is the first study of microplastics in a marine mammal in Canada.

Lead author Rhiannon Moore says she wasn't expecting to see so many microplastics so far north.