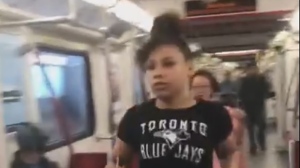 A suspect in a robbery aboard a TTC train on July 28 is shown in a screengrab image. (YouTube)

Toronto police say they have arrested and charged a 19-year-old woman in connection with a racially charged confrontation between two women on board a subway train last month.

A passenger who shot video of the incident told CTV News Toronto that on July 28, a woman in a black t-shirt was observed chasing another woman inside a subway car near Eglinton West Station.

The two women appeared to be fighting over a cell phone.

In the video, the witness says that the woman in the black t-shirt told a victim to “go back to China.”

The suspect responds that she is trying to delete a video of her that that the other woman took with her phone.

The witness then indicates she will call the police and the video ends when the subway car doors open and both women run out on to the platform.

The witness said the dispute started when the suspect asked a man aboard the train for a cigarette and was denied. The suspect then started uttering racial slurs at the man, prompting a woman sitting nearby to start recording the incident with her phone.

The TTC said Tuesday it condemns any use of racially-charged language on its trains or property.

On Wednesday at 1:30 a.m., Toronto police said a suspect identified as Tashia James of no fixed address surrendered to police.

She is expected to appear in court at College Park on Wednesday.