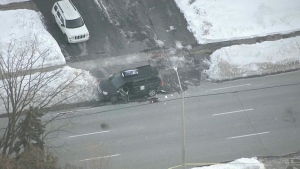 It happened near King Street and Central Park Boulevard at around 3:20 p.m. on Friday.

The victim, identified as 57-year-old Michael Ryan, was rushed to hospital but was pronounced dead shortly after his arrival.

Police have previously said that they believe Ryan may have been the driver of a taxi found at the scene.

A suspect was arrested nearby shortly after the incident and held in custody over the weekend, however his identity was not immediately released.

In a news release issued on Monday morning police said that 31-year-old Daniel Pestill, of no fixed address, is charged with second-degree in the case.

Police confirmed that they located a firearm at the scene.

The investigation into the homicide is continuing and police are urging anyone with information to come forward.