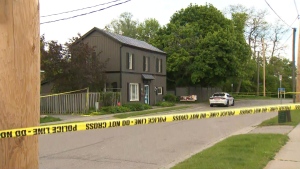 Police are searching for a suspect after two men were shot inside a home in Oshawa on Sunday night.

Police are searching for suspects after two men were shot inside a home in Oshawa late Sunday night.

Officers were called to a residence on Erie Street, located near Simcoe Street South and Bloor Street, at around 10:20 p.m. for a reported shooting.

When they arrived, they found two males suffering from gunshot wounds inside the home.

The male victims, ages 34 and 51, were transported to a Toronto trauma centre for treatment.

Their injuries, police say, are serious but not life-threatening and they are both listed in stable condition.

According to investigators, the home where the shooting occurred was known to police.

Officers will be canvassing the area today, searching for evidence and anyone who may have witnessed suspicious activity.

Police say they are also investigating a stabbing that may be connected to the incident.

A male suffering from stab wounds was dropped off at a local hospital at around the same time the shooting occurred, police tell CP24.

Police are searching for a suspect after two men were shot inside a home in Oshawa on Sunday night.