Suspect sought after man assaulted outside restaurant near Christie and Bloor 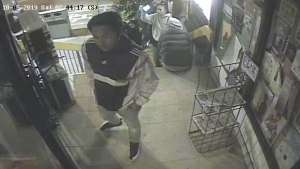 Police are searching for a suspect who allegedly assaulted a man outside a restaurant near Christie and Bloor streets. (Toronto Police Service handout)

Toronto police are searching for a suspect who allegedly punched a man outside a restaurant near the city’s Christie Pits neighbourhood earlier this month.

Police say the incident occurred shortly before 3 a.m. on Oct. 5 in the area of Bloor and Christie streets.

Investigators allege that a 22-year-old man was walking toward the front entrance of a restaurant when he was punched by a man.

The victim, police say, fell over a handrail and was later taken to hospital to be treated for injuries he sustained during the assault.

He has been described by police as between 25 and 30 years old, approximately five-foot-five, and has a muscular build, and short, black hair.

Police say he was wearing a black and white Adidas jacket with a hood, light blue jeans with tears on the front of the legs, and black running shoes with white soles. Investigators also say the suspect is a smoker.

Security camera images of the man have now been released and police are asking anyone with information about the case to contact investigators or Crime Stoppers anonymously.