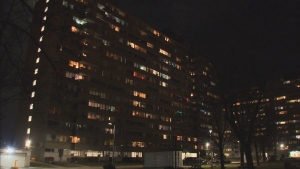 Police are investigating a stabbing on Victoria Park Avenue.

A man was taken to hospital after a stabbing in Scarborough Sunday evening.

Toronto police said they received calls about a man stabbed in the abdomen in the area of Victoria Park and Huntingwood Drive shortly before 6:30 p.m.

When officers arrived, they found the victim, and paramedics transported him to the hospital with serious but non-life-threatening injuries.

Police are looking for a male suspect described as white, five-foot-11 with a heavy build. He was wearing a black do-rag, red plaid jacket, and black or grey pants.