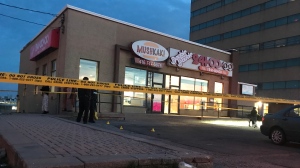 Toronto police are investigating a shooting in Rexdale on Wednesday, April 8, 2020. (Craig Wadman)

Police are looking for a suspect after shots were fired in Rexdale Wednesday evening.

Toronto police were called to a restaurant in the area of Rexdale Boulevard and Kipling Avenue at around 7:45 p.m. for reports of someone shooting at a car.

Following a foot pursuit, police said two men who were seen running from the area were taken into custody.

The men were later released after they were determined to be not involved in the incident, police said.

There were no injuries reported.

Toronto police are investigating a shooting in Rexdale on Wednesday, April 8, 2020. (Craig Wadman)