Suspects in hoods carjack victim at gunpoint in Brampton: police 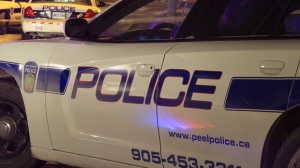 A Peel Regional Police cruiser is seen in this undated file photo.

Suspects in hoods carjack victim at gunpoint in Brampton: police

Police are looking for two armed suspects behind the wheel of a white Lincoln SUV after a gunpoint carjacking in Brampton on Friday morning.

Police said the victim was behind the wheel of the Lincoln near McLaughlin Road and Flowertown Avenue in Brampton at about 11:14 a.m. when two teenage males approached the vehicle.

Investigators said at least one firearm was drawn and the suspects drove off in the Lincoln, which has an Ontario license plate LADYASH.

Both suspects are described as white and in their teens.

One was seen wearing a red hoodie while the other was wearing a grey hoodie.

Anyone who spots them or the vehicle should call 911.