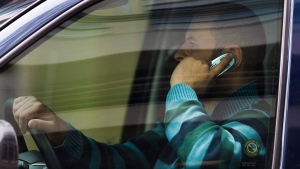 A driver talks on his cell phone while driving in downtown Ottawa on Wednesday, Sept. 30, 2009. (The Canadian Press/Sean Kilpatrick)

TORONTO -- Drivers who talk on a cellphone -- even one that's hands-free -- while executing a left-hand turn at an intersection could be putting themselves at serious risk, say neuroscientists who imaged the brain to see how it copes with competing tasks.

Making a left turn and phone-chatting at the same time "could be the most dangerous thing they ever do on the road," said Tom Schweizer, director of neuroscience research at St. Michael's Hospital in Toronto.

Schweizer and his research team wanted to see how the brain deals with the often complex task of making a left turn at a busy intersection -- where most serious traffic accidents occur -- when coupled with a common distraction like conversing by cellphone.

The team set up a driving simulator, which includes a steering wheel, brake and accelerator pedals, and a simulated traffic scenario on a monitor, inside a functional MRI. The high-tech machine captures real-time images of the brain while a person performs a task or reacts to stimuli.

Sixteen participants (seven females and nine males), aged 20 to 30, who had been driving an average of seven years, were put through simulated driving tests while in the MRI. For consistency in the study, all were right-handed.

They were asked to execute a number of normal driving manoeuvres, including a left turn, said Schweizer, explaining that their field of vision is filled with the traffic-scenario image, which is similar to looking through a vehicle's windshield.

As a subject performed the various tasks, researchers watched another screen showing what areas of their brain were activated.

"What you see when they're doing a left-hand turn at a busy intersection, the entire brain lights up, which is far different from what brain areas are used when just doing straight driving or making a right-hand turn," he said.

"You have to look at oncoming traffic, pedestrians and lights, and co-ordinate all that," he said. "It requires a significant amount of co-ordinated brain areas to pull that off."

The researchers then added a distraction to the task of making a left turn, in this case by asking true-false questions that were stand-ins for talking on a hands-free cellphone.

One question was: A triangle has four sides. True or false?

"Everybody knows the answer to those questions, but you're forced to listen to the speaker and process that information and come up with a true or false response," Schweizer said.

"When we did that, what we found was quite striking," he said.

The visual processing part of the brain started to shut down, so resources could be allocated to the prefrontal cortex, which controls decision-making.

"What was really striking, though, was how much of the visual cortex started to shut down. It was almost a 50 per cent drop ... So that was quite a dramatic shift," he said.

Schweizer said simultaneously trying to juggle a left turn and a verbal distraction -- even a passenger speaking or a radio talk show -- could make the traffic move that much more risky.

"I think it's still fairly dangerous to still be talking on a hands-free device, even though there's some thinking that it's so much better for us and will lead to far fewer accidents" than holding a phone to the ear, he said.

"We think that that's so much worse, but the reality is that hands-free is not brain-free."

The study was published online Thursday in the journal Frontiers in Human Neuroscience.

Future research will involve a larger number of participants of various ages, including older drivers and those with brain injury or neurological disorders such as dementia.