Tarion CEO steps down, minister orders changes to board 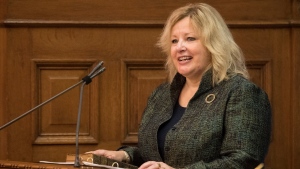 Lisa Thompson is sworn in as her new role as Ontario's Minster of Government and Consumer Services at Queen's Park in Toronto on Thursday, June 20, 2019. THE CANADIAN PRESS/ Tijana Martin

TORONTO - Ontario's government and consumer services minister says she asked the CEO of the corporation that enforces warranties on new homes to step down.

That follows a recent auditor general report that slammed Tarion Warranty Corp., saying it has favoured the interests of builders over homeowners.

Minister Lisa Thompson says last week the CEO agreed to step down, and she has ordered changes to Tarion's board.

Previously, Tarion required half of its board of directors to be nominated by the Ontario Home Builders' Association, but Thompson says now no more than a third of the board will represent new homebuilders and vendors.

Thompson also introduced legislation Thursday that she says would enhance consumer protection, such as giving the warranty administrator greater ability to scrutinize builder applications and conduct more risk-based inspections before a homeowner moves in.

The government has previously announced it will establish a separate regulator for new homebuilders - something that has been handled by Tarion, and which critics have called a conflict of interest.