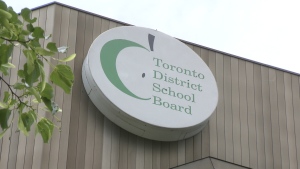 Canada's largest school board is trying to assure parents it can provide a safe, stable and successful learning environment during the pandemic as it deals with the fact that thousands of students have left its system.

The chair of the Toronto District School Board said while it's unclear where the students who were expected to enroll have gone -- whether to private school, a homeschooling situation or a public school in a different city -- the board wants to ensure that those who remain feel comfortable.

“Parents have a choice and they may choose something different for a while,” said TDSB chair Alexander Brown.

“Our board needs to be able to continue offer a wide range of courses to students ... provide confidence that children can learn and succeed in their classes, and to remain transparent and fully accountable for all actions.”

Earlier this week, the board revealed that it has seen 5,500 fewer students show up to classes compared to what it had anticipated for the school year.

Brown cited the pandemic when trying to explain the figures and said some families may have moved out of Toronto, which has been a COVID-19 hot spot.

“A lot of people have tried to get out of city environments, so maybe they've decided 'we're just going to move to a new place,”' he said.

Brown said the decrease in student attendance will affect the amount of provincial funding the board receives, to the tune of about $42 million.

“If the kids don't come back, the money may not be there for us to continue with the budget that we had planned and that could have a negative impact on all kids in the system,” he said.

Meanwhile, the neighbouring Peel District School Board said it had seen 3,000 fewer students than it expected.

“Those parents that might have opted for the private school option might have more confidence in those schools to provide a safe learning environment, there might be more supports for those students learning in an online environment,” he said.

High school students must provide their home address and Ontario Education Number when moving from a public school board to a Catholic or private school, or vice versa, said Volante, suggesting that would help identify how many students have transferred to private schooling.

Amanda Dervaitis, executive director of Ontario Federation of Independent Schools, said there's been an increase in interest in independent schools since the summer.

Dervaitis said members of her group, which represents non-publicly funded schools, have been doing well during the pandemic.