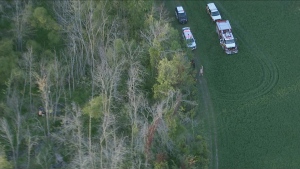 Police say a 14-year-old girl has died after she became trapped in a marshy bog outside of Hamilton.

A teenage girl has died after police say she was involved in a horseback riding accident outside of Hamilton on Monday night.

According to police, a 14-year-old Oakville girl and her mother were riding their horses on a property along Millgrove Road, near Highway 5, at around 5:30 p.m. when they encountered a path that was not familiar to them.

At one point while riding along the path, police say, the teenage girl’s horse became trapped in a marshy bog.

Police say the girl was able to dismount her horse but while waiting for help, she became submerged.

She was pulled from the bog a short time later without vital signs and was rushed to hospital in life-threatening condition.

She later died from her injuries, police confirmed on Tuesday morning.

According to investigators, both mother and daughter were experienced horseback riders.

Police have not released the name of the deceased.

Investigators are asking anyone with information about the incident to call the Hamilton Police Service or Crime Stoppers anonymously.