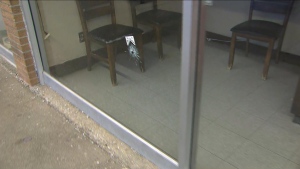 A bullet hole is seen in a window following a shooting at Yorkwoods Plaza December 13, 2019.

A 16-year-old boy is lucky to be alive after he was shot multiple times in front of a plaza in North York on Thursday night.

The boy was walking along Jane Street in the vicinity of Yorkwoods Plaza at around 10:30 p.m. when at least one assailant in a white sedan opened fire on him, police have told CP24.

Reports from the scene suggest that the boy ran through Yorkwoods Plaza as errant bullets hit parked vehicles.

He then eventually reached a townhouse complex behind the plaza, where it is believed that he called 911.

The boy sustained up to four gunshot wounds as a result of the shooting and was taken to hospital in serious condition.

On Friday morning, police could be seen towing a Mercedes SUV with three visible bullet holes from outside the plaza. A bullet hole was also visible in the window of a Chinese restaurant in the plaza.

Police are urging anyone who may have witnessed the incident to come forward.

A witness told CP24 that he saw several young males standing in the plaza on Thursday night wearing body armour.

The plaza has been the scene of several shootings over the years, with bullet damage visible to brick walls and display signs.

No suspect descriptions have been provided at this time, though police say that they plan to review surveillance footage from the plaza for additional clues.