Teens sought after Jewish boys attacked near Bathurst and Lawrence 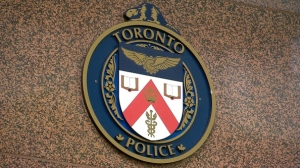 Four Jewish teenage boys were victims of an alleged hate crime in the Bathurst Street and Lawrence Avenue area this weekend.

At around 8 p.m. on Sunday, four 17-year-old boys were walking dressed in attire of their religious faith, police said.

As they were walking, they were approached by a group of nine teenagers who were not known to them. Investigators said derogatory comments against the boys’ religion were made as the two groups crossed paths.

“They were being made fun of based on what they were wearing,” Toronto police spokesperson Katrina Arrogante told CP24 on Monday afternoon.

“They were wearing their yarmulkes on their heads – aside from that I’m not quite sure what their basic outfit was, but that was the comment that was being made to them and that’s when the assault occurred.”

The larger group then allegedly assaulted two of the teenage boys by kicking and punching them.

One of the boys had his sunglasses stolen during the incident.

The two boys, who said they were assaulted in the incident, told CP24 the suspects were yelling anti-Semitic slurs at them before things got violent.

“As soon as they spotted us – you know it’s hard to miss us with the way we are dressed – they started chanting things and screaming things and harassing us,” one of the two boys said. “As a Jew and as a religious Jew, as an observant Jew in Canada, which officially accepts all religions, all races, everybody, to be attacked physically just because I’m a minority is a thing that should have been part of history, it happened once, it shouldn’t have happened again.”

“I’m very offended but I’m still a proud Jew and nothing is going to knock me down because we sometimes have to go through it and it makes us stronger,” the second boy said.

Police say the perpetrators fled the scene before officers arrived, but authorities were able to locate and arrest one suspect. The outstanding suspects have only been described by officials as being in their “early teens.”

The victims were treated at the scene for their minor injuries.

In response to the alleged incident, Mayor John Tory said “no one should be attacked for their religion” in a tweet. Ontario Premier Doug Ford also commented on the incident on Twitter saying “there is no place in Ontario for anti-Semitism and our government will not tolerate hatred of any kind.”

Vice-president of The Centre of Israel and Jewish Affairs in the Greater Toronto Area Noah Shack called the matter “deeply disturbing” and “vile.”

“Jewish Canadians should never fear wearing their kippah in public,” he said.

“Our security team is in constant communications with our law enforcement partners who remain on the scene and are conducting an active investigation.”

The CEO of B’nai Birth Canada said their organization is in contact with the victims and is helping them provide details to investigators.

“This is extremely serious. I mean I don’t think it could get much more serious than people getting attacked on the streets because of who they are,” Michael Mostyn said. “It’s very traumatizing, especially for students – younger people, to go through something like this.”

“We need to do better as a society to find real consequences against the purveyor of hatred so that when those consequences are seen hopefully it will stop individuals from picking on others because they are different.”