The RCMP have 'let down' Indigenous fishers facing violence in Nova Scotia: minister 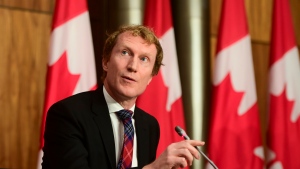 Marc Miller was one of four federal cabinet ministers who took part in a news conference that followed a turbulent weekend in the southwestern corner of the province, where a lobster pound was burned to the ground and police accused one person of assaulting a Mi'kmaq leader and another of setting fire to a van owned by an Indigenous fisherman.

“Indigenous people have been let down by the police, those who are sworn to protect them,” Miller said as he opened the news conference in Ottawa. “The protection of people on both sides has to prevail, and clearly that has not been the case up until now.”

Miller said even though Indigenous people have experienced discrimination throughout Canada's history, the Indigenous fishers in Nova Scotia have stood up for their rights without resorting to violence.

“It is a testament to who they are that they do so peacefully,” Miller said. But he said he fears the violence could lead to loss of life, adding, “We must reach a resolution.”

Public Safety Minister Bill Blair said the Mounties are doing their job. “The police are, in fact, acting,” he said. “I'm absolutely confident that the RCMP know their job.”

Blair said additional officers had been deployed to respond to the increasingly violent dispute, which started Sept. 17 when the Sipekne'katik First Nation launched a self-regulated commercial fishery outside of the federally designated fishing season.

The public safety minister said Nova Scotia RCMP are now able to draw on RCMP resources from other provinces within the Atlantic region to counter “reckless violence and racist threats.” And he said an RCMP boat was in the area, along with a vessel from the Canadian Coast Guard.

Meanwhile, Prime Minister Justin Trudeau's office issued a statement Monday saying he had spoken with Nova Scotia Premier Stephen McNeil on Sunday, and they “condemned the appalling violence” and agreed that respectful dialogue was key to resolving the dispute.

During an emergency debate Monday night on the dispute, Trudeau told the House of Commons the violence “is unacceptable, it is shameful and it is criminal.”

He said his government will uphold Indigenous fishers' inherent right to pursue a “moderate livelihood,” but also promised that conservation of lobster stocks, which commercial fishers fear are being compromised, will underpin its decisions in the dispute.

Trudeau was blamed by opposition leaders for allowing the dispute to spiral into violence.

Conservative Leader Erin O'Toole pointed out that he raised the escalating tensions directly with the prime minister a month ago, yet he said the government has done nothing.

“These things don't go away. They require leadership and we have a government that prefers photo ops over followups, hashtags over real work. Hoping that problems will go away is not leadership,” O'Toole said.

NDP Leader Jagmeet Singh similarly accused the government of inaction, although he blamed past Liberal and Conservative governments alike for letting the problem fester for more than two decades.

He called the violence “terrorism” against Indigenous people and he said the failure of police to protect them is “evidence of systemic racism.”

The lobster dispute is a sensitive issue for the Trudeau government, which has made reconciliation with Canada's Indigenous people a top priority.

The decision to dispatch more officers to Nova Scotia follows complaints from Indigenous leaders who have pointed to images on social media that appear to show Mounties standing by while protesters vandalized property and allegedly assaulted Sipekne'katik Chief Mike Sack last week.

Miller made it clear that Ottawa will be taking action to ensure the Mi'kmaq can exercise their constitutionally protected treaty right to earn a moderate livelihood from fishing.

“The acts of violence we have seen in the past days and weeks are disgusting, unacceptable and racist in nature,” he said.

Miller also stressed that the new Indigenous fishery represents a tiny fraction of the traditional lobster fishery in St. Marys Bay, where the Sipekne'katik First Nation is now fishing.

In recent weeks, some non-Indigenous fishers in Nova Scotia have staged protests to highlight the fact that even though the Supreme Court of Canada has affirmed the treaty right to fish, hunt and gather for a moderate livelihood, the court also said Ottawa retains the right to regulate the fisheries for conservation purposes.

They say Indigenous fishers should not be allowed to fish outside the federally regulated season because that could harm lobster stocks.

Federal Fisheries Minister Bernadette Jordan, who represents a rural fishing community in Nova Scotia, said conservation “underpins everything we do,” adding that the lobster stocks in Nova Scotia remain healthy.

“We will never move forward with a plan that threatens the health of the species,” she said.

Jordan did not answer when asked if the treaty right to fish for a moderate livelihood extended to fishing outside the regular season.

When the dispute erupted in September, Jordan made it clear that Ottawa was opposed to fishing outside the season.

Jordan also confirmed that a “ministerial representative” would soon be named to facilitate discussions with non-Indigenous commercial fishermen.

In Ottawa, NDP critic Charlie Angus also took aim at the RCMP. “What's really disturbing is the lack of action by the RCMP,” he told a news conference. “The federal government needs to send a clear message that we have to be willing to protect Indigenous treaty rights.”

On another front, Blair confirmed that the suspect accused of assaulting Sack on Oct. 14 had been released from custody with conditions.

Sack has criticized the RCMP for being “useless” in the face of violence. And on the weekend, he called on Ottawa to send in the military to keep the peace.

Blair dismissed that request Monday, saying the incidents in Nova Scotia require a police response, not a military operation.

“It is a peacekeeping operation and it is the responsibility of the police,” he said.

- With files from Michael MacDonald in Halifax.