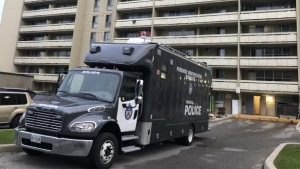 A Forensic Identification Services vehicle is shown at the scene of a homicide investigation at an apartment building in Scarborough on Sept. 22, 2019. (CTV News Toronto / Carol Charles)

A third arrest has been made in connection with an assault in Scarborough last month that left a 52-year-old man dead.

On Sept. 22 at around 11 p.m., emergency crews were called to an apartment building on Antrim Crescent, located in the area of Kennedy Road and Highway 401, for a medical complaint.

When officers arrived on scene they located “the lifeless body” of a male victim, later identified as Edwin McGowan, inside his 15th floor unit.

Investigators previously said “a man had suffered injuries as a result of an assault.”

He was pronounced dead in hospital.

The first arrest in the case was made on Sept. 27. At the time, Pickering-resident Peter Wright, 42, was charged with second-degree murder.

About a week later, Toronto-resident Fantasia Hoo-Hing, 32, was also charged with second-degree murder.

A third arrest was then made in the case on Oct. 13.

Pickering-resident O’Neil Thompson, 35, has been charged with second-degree murder as well.