'This has gotten out of hand:' province pushes back against idea developers could use own building inspectors 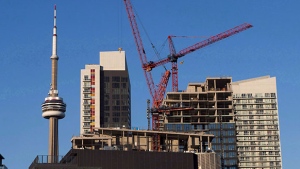 The province is pushing back against the notion that an ongoing consultation on changes to the building code could ultimately lead to developers being allowed to hire their own inspectors and bypass municipal inspections.

In September, the Ministry of Municipal Affairs and Housing released a discussion paper that included a package of changes that could be made to the building code to improve and expedite services.

One of the ideas involves the creation of a “Certified Professionals Program,” wherein architects and engineers would be able to undergo additional training to perform some of the work currently done by city building inspectors.

The ministry said that doing so would ultimately “streamline the permit approval process.”

Toronto’s chief building official, however, subsequently raised concerns about “potential conflicts of interest” in a report that was considered by the city’s planning and housing committee earlier this week.

That committee then voted to ask staff to advise it about “any legal options available” in response to the hypothetical changes.

Speaking with CP24 on Thursday, Ontario’s Minister of Municipal Affairs and Housing Steve Clark said that the response to the consultation process has “gotten way out of hand.”

He said that the ideas in the document are not formal proposals and shouldn’t be viewed as such.

“I would never, and I want to stress this, I would never agree to a system where an owner of a building could hire an unregulated inspector outside of the existing municipal inspection process. In fact if people looked at the consultation document we are using some models where someone with particular expertise would work in conjunction with municipal building officials,” he said. “Quite frankly I am not happy with the opposition demonizing engineers and architects and building inspectors and suggesting that they are going to accept dollars for their work.”

In his report , Toronto’s Chief Building Official Will Johnston wrote that he couldn’t support a program whereby builders would be able to hire people to “assume the plan review and inspection roles and responsibilities on behalf of municipalities.”

He said that residents in Toronto rely on the expertise of city building staff for “an independent and objective review of construction.”

For his part, Clark said that the idea isn’t to skirt the authority of municipal housing inspectors but rather to “compliment the good work that building officials are doing.”

“Right here in the city there is a very large building department but in some rural, northern and small communities they are challenged to have that expertise at the building code level,” he said. “We must realize that one size doesn’t fit all.”

Clark said that the consultation remains in its “very early stages” with no real timeline for legislative changes at this point.