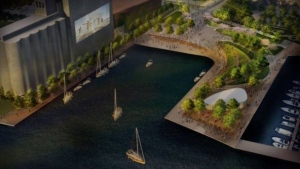 This rendering shows the city's plans for a new Bathurst Quay waterfront park. (City of Toronto)

A money-losing parking garage near the foot of Bathurst Street could be closed as early as 2024 to make way for a new “signature” waterfront park which is currently in the early stages of development, city staff say.

The two-storey below grade garage, built in 1985, has been operated by the Harbourfront Centre under a long-standing lease agreement but staff say that the structure needs millions of dollars in repairs and is likely to be “permanently closed” by early 2024.

That would, in turn, create an opportunity to utilize the land it stands on as part of a new three-acre waterfront park planned for the area. The vision for the park also calls for a structure to be built over part of the adjacent Portland Slip.

Speaking with reporters during a press conference on Tuesday, Mayor John Tory said that the underutilized parking garage would essentially serve as the “structural foundation” for the “new signature waterfront park.”

Right now construction is slated to begin in 2026 but Tory said that he believes that timeline can be accelerated.

“I am excited about the Bathurst Quay waterfront park because we get to open three more acres of our waterfront,” he said. “For so many years this city turned its back on the waterfront. I was at something just last week remarking on the fact that I remember when there were literally car wreck yards and used tire places right up against the water. That is what was there and we are changing that. A parking lot may have seemed like a good idea at the time it was put there but like a lot of things times change and we will do something much, much better.”

The update on the Bathurst Quay project is included in a wider staff report that also provides details about planned parkland initiatives for the median that runs along University Avenue, as well as areas surrounding existing rail corridors that run through the downtown core.

Tory conceded that the projects are “big” and “will take some time to get done” but he said that it is “important” for the public to know that the city is making progress.

For that reason, the staff report details activities that have been undertaken to date to advance each of the projects as well as timelines for the work that the city hopes to accomplish in the next five and 10 years.

“Like all major moments in the life of our city we are laying the ground work today to provide public spaces for current and future generations of residents and visitors,” Tory said. “These projects are opportunities to deliver much needed public and green space in areas where it is currently lacking. They will provide beautiful new parks and public spaces for everyone who lives here works here and visits here. These projects are all possible, even if they are also complicated.”

Staff say that “early conceptual planning” for the Bathurst Quay park envisions a “combination of both hard and soft scape spaces suitable for a range of both passive and programmed park uses and functions.”

They also say that the historic Canada Malting Company silos will be utilized as “a year-round, outdoor canvas for possible custom projection mapping shows, waterfront film festivals hosted in the new park space, and/or displays of public art that showcase both traditional and digital artistic mediums.”