'This is unacceptable': Boy, 7, in hospital after shooting in Hamilton 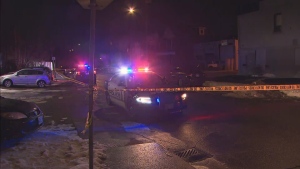 Hamilton police are investigating after a child was shot at an east end home on Thursday night.

A seven-year-old boy is in hospital after a shooting at an east-end home in Hamilton.

Emergency crews were called to a residence on Gordon Street, in the area Barton Street East and Gage Avenue North, just before 8 p.m. for reports of a shooting.

"They discovered that a seven-year-old male had been struck by a shot that had come from outside of the home," Bergen said.

Hamilton paramedics said the child was taken to a hospital with serious, life-threatening injuries. Police later said the boy's condition has stabilized.

"This is unacceptable," Bergen said, adding that the boy is the city's first shooting victim of 2020.

Investigators are appealing to anyone who may have witnessed the incident to contact them.

"This is when the public needs to come together and make sure that if you've seen anything, you say something."

Hamilton Police confirm that a 7-year-old child has been shot at an east end residence in #HamOnt. The child has been transported to hospital. There are no updates at this time. More to come.

Hamilton police are investigating after a child was shot at an east end home on Thursday night.