'This unveiling is a statement of unity:' Pink bandage added to Toronto sign 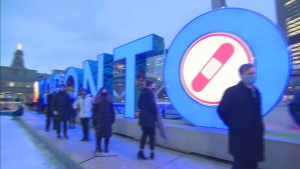 The Toronto sign at Nathan Phillips Square has gotten an updated look as the city turns to some novel approaches to get more of its residents vaccinated.

A new illuminated pink bandage, matching the one in most of the promotional materials used by the city during the vaccine rollout, has been added to the final ‘O’ in the iconic sign.

The hope, according to city officials, is that the bandage will both commemorate the success of Toronto’s vaccination rollout to date while also helping to encourage unvaccinated residents, particularly school-aged children who only recently became eligible, to roll up their sleeves.

“This unveiling is a statement of unity,” Board of Health Chair Joe Cressy told reporters at Nathan Phillips Square on Tuesday afternoon, immediately prior to unveiling the updated sign. “This vaccination effort has involved all of us coming together and getting a vaccine. It's more than just protecting yourself. It's about protecting each other. It's about protecting your family members, your colleagues, your peers at school, and your entire city.”

To date nearly 89 per cent of eligible Toronto residents have received at least one dose of COVID-19 vaccine, including approximately 26 per cent of children aged five to 11 who only became eligible to be vaccinated two weeks ago.

The city’s goal is to eventually have 90 per cent of residents fully vaccinated but Mayor John Tory told reporters on Tuesday that the work won’t stop there, especially amid concerns about the Omicron variant.

“We're just going to keep going and get as many people as we possibly can vaccinated because it's good for them,” he said.