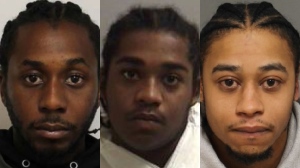 (From left to right): Michael Smith, 29, Andrae Douse, 21, and Dayne Sitladeen, 27, are all wanted on a charge of first-degree murder. (Toronto police handout)

Det. Steve Henkel says that on May 1 at around 1 p.m., police were called to 256 John Garland Boulevard, unit 118, for a report of shots fired.

He was later pronounced dead at the scene despite attempts by paramedics to revive him.

Henkel said officers conducted an extensive canvas of the neighbourhood and with the help of residents and security camera footage, they have identified three men they believe are responsible for Grindley’s death.

Each is sought on the strength of a Canada-wide warrant.

“I encourage anyone who knows these males, or who may know the circumstances surrounding Blain’s murder to please contact us,” Henkel said.

Henkel says their attempt to locate the trio has led them “outside of the GTA,” but he would not comment on where they believe the suspects are.

Police say the three suspects should be considered armed and dangerous and should not be approached.

Grindley’s pastor said earlier this month that he was kind but quiet man who kept to himself, and that his parents were heavily involved in the church.