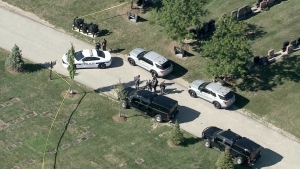 Police respond to a shooting at a cemetery in the area of Bovaird Drive and Chinguacousy Road in Brampton Monday August 31, 2020.

Three people are in hospital, at least two of them with life-threatening injuries, after gunfire erupted at a cemetery in Brampton Monday afternoon.

Peel Regional Police said they received a call about gunshots in the area of Bovaird Drive and Chinguacousy Road at around 3:44 p.m.

According to Peel Regional Police, a group was assembled by some grave stones at the Brampton Funeral Home and Cemetery when multiple shooters opened fire on them.

Const. Bancroft Wright said six to seven people were firing at each other and that the shooting appears to have been targeted.

“At this point we have three individuals with gunshot wounds. We believe that they are all associated to this main scene,” Wright told reporters at the cemetery Monday evening.

The gunfire sent the crowd scrambling.

One victim ran across the street and collapsed on the porch of a townhouse. Another man was dropped off at a fire hall about a 20-minute drive away in the area of Hurontario Street and Steeles Avenue.

The third victim walked into Brampton Civic Hospital and there were no details about the extent of his injuries, police said.

Wright said there are four vehicles within the scene and two of them were struck by gunfire.

He said police are now looking for two suspect vehicles, one of them a Mercedes, the other a light-coloured Honda.

No funerals were scheduled to take place at the cemetery at the time of the shooting and it’s not clear exactly what sort of a gathering was taking place, Wright said.

Anyone with information is being asked to contact investigators.